In what was a world class semi final the Irish mens seniors team – Johnjo Kenny, Bill Gray, David Whyte, Tony Tierney and fifth man David Hume beat the legend that is three-time world curling champion Eigel Ramsjfell and his Norwegian team at an extra end to go through to the world senior curling championship final against Canada.

With the hammer in the extra end, Irish skip Johnjo Kenny, who has been immense all week, held his nerve to nail his last take out – surely the most important shot of his long curling career.

The game in the first half was a case of draw hit, draw, hit, hit, hit, draw. Ramsjfell must have though he was playing the world semi in 1984 again. But  a rare mistake from Johnjo at the fifth end, when he freshed a take out, opened the door for the Norwegian skip to draw for two.

In the sixth end with the score at 1-3, Johnjo played a great runback with his first stone to lie two. Norway hit but rolled into open and ‘The Big Man’ hit for a two. 3-3.

The seventh end was the killer punch from the Irish. It was not looking good for the team as the Norwegians were lying two tucked nicely in behind cover. But, Irish third Bill Gray played the shot of his life when played a fantastic across the house double to take out two Norwegian stones and lie shot behind the front guards. Norway attempted to angle a front stone onto the shot at back-ring weight but got it too thin and it rolled over the top. Ramsjfell drew second shot but Johnjo guarded and snuffed out the raise leaving the Norwegian with no shot at all. A steal of one took the score to 4-3.

Norway took their one at the last end when Ramsjfell drew the button and this enthralling semi moved into the extra end.

All the team played their part in keeping the four foot clear for their skip, but Bill Gray’s second peel just clipped an Irish stone five feet outside the house and moved it to about a foot to the right of the centre line. Norway pounced. They tried to draw behind but each time left the hit on.

Ramsjfell drew, Johnjo, taking about 18 inches of ice played a hack weight hit and stick, Ramsjfell did the same. Silence fell in the Taarnby curling rink as Johnjo sat down in the hack. He took the same ice, played the same weight, the sweepers and Bill in the head judged it to perfection. It sailed past the guard by about an inch but it seems to take an eternity after that before it hit the Norwegian shot and stuck for the match winner.
Afterwards Johnjo said: ‘I didn’t want to take too much time to think about it! I just played it.’

Irish Curling Association President Bill Gray, the team’s third player said; ‘You can’t imagine how we feel at the minute. To be coming home with nothing less than a silver medal is one thing, but, to make the final, curling the way we did in this game is a fantastic achievement. We couldn’t have done it without all the support from here and at home. Come on Ireland!’ 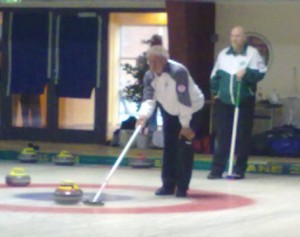 Johnjo Kenny and Eigel Ramsjfell on the ice together 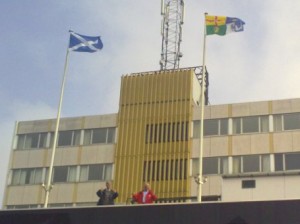 Tony Teirney and Tommy Campbell and the Irish and Scottish flags flying above the hotel at lunchtime.

The ladies final sees Scotland play Canada. Both games are at 2pm today.