Escape from Colditz and other stories….

The Irish Mixed Curling team’s visit to Erzurum in Turkey for the European Mixed Curling Championships was in turns breathtaking (literally), hilarious and traumatic.

Curling wise it was a case of could have and should have done better. There was no doubt that we had the beating of every team we played, bar the Swiss. But, as our skip pointed out in no uncertain terms, “When competing at that level, inconsistency and basic errors will be swiftly punished”.

The loss to Sweden on the last stone was a particularly gut wrenching as the game was ours for the taking if only I had cleared the guard with my second stone instead of skiffing it. (God don’t you replay those shots 1,000 times again in your head and never miss.) But, however, although this made Robin’s last two stones more difficult, we still had a shot for the game. The cool dude Swedish skip had played a perfect freeze onto the top of Robin’s first stone in the four foot and was well hidden. Robin’s second stone was well played but despite furious sweeping we just could not hold it and instead of sitting on top of the Swedish stone for shot, it drew an inch to far. Always with the Irish at the European’s another inch would make all the difference.

The Swedes were unbeaten at that point and afterwards the third player said to me in the changing rooms: “I say to myself if we win this game I believe in God.”

After that complete scunnering it was a huge effort to get motivated for the last game against the Russians. But somehow we did enough to get the win despite spending ten minutes in complete darkness halfway through the game after a power cut. That seriously made us wonder about the nearness of the Syrian artillery.

So that was the curling over despite finishing on the same win-loss record as Switzerland they got the nod from Dor the umpire as they had beaten us in the round robin. When Scotland’s men were in the same position in the Seniors last April they got a play-off. But hay-ho – not that we’re bitter. 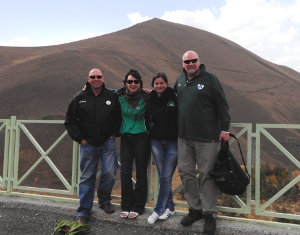 The accommodation at the Dedeman Palandoken Ski Lodge, better known as Colditz, was our base for the week but unfortunately well out of the town. Three quarters of the way up such a steep mountainside all vehicles heading there spent the last ten minutes in first gear. Once you arrived you realised there was nothing – absolutely nothing – for miles and miles and miles.

Captured there by the organising committee, we had to cope with food that was on the south side of inedible. exploding showers, heaters that would either not switch off or on, doors coming off their frames, telly’s with no cables and worst of all – no internet connection when the Ryder Cup was on! Disssasstaaar! 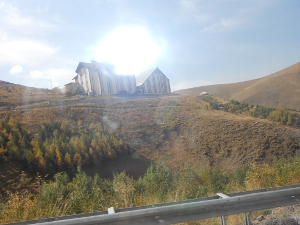 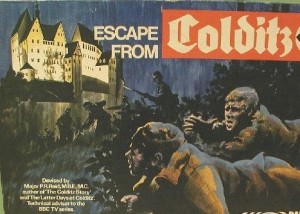 Having endured this for a week, tunnels were dug, the guards had been distracted and on Friday night Colonel Gray made his escape in the back of the bread van. As the clock ticked onwards through the evening, Flight Lieutenant Kenny said: “It will be bummer if we are sitting in the dining room and Robin is marched back in by the guards.” 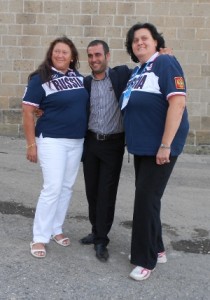 On the Wednesday we took a two-hour tour of Erzurum that was unmissable thanks to the antics of Olga the (former) Russian coach and her side kick Nadina. Olga just took complete control of proceedings elbowing the wee Turkish guide out of the way. She was soon directing us all on and off the bus, up and down the streets and in and out of the Mosque. But the highlight has to be sitting cross-legged in a Turkish tea house sipping tea and eating God knows what. The bread looked like napkins. 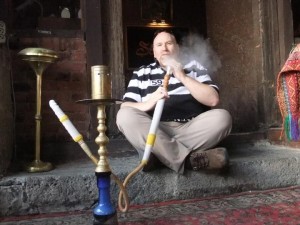 On the Friday we nearly topped that by returning to the same teahouse to buy a smoking hookah. Johnjo said he was keen to try it and Hazel knew how things like that work so when the huge glass jug arrived the Big Man sucked and sucked and sucked on the pipe thingy. He must have lungs like a racehorse as when he exhaled we were all engulfed in apple flavoured smoke. JJ compared it to being a contestant on Stars on Your Eyes…………”Tonight Matthew I am going to be………”

The Curse of Erzurum

During the week at least four competitors were hospitalised with food poisioning and most teams had one or more members down with Montezuma’s Revenge, (Ewan McDonald have a scarey moment when giving ice followed by a quick sprint to the toilets) the Finnish lead returned from being treated for food poisioning only to be carted back to hospital the following day after severing a tendon in her hand on broken glass (they won the bronze with three players). The Austrian lead fainted on the ice and on the last day we discovered our Turkish tour guide had fallen over a step and broke her ankle. We emerged fairly unscathed. I had a sore throat and lost my voice for a couple of days but I think I picked that up in the plane on the way to Istanbul, Johnjo had a dicky tummy for a day and a sore knee after a spectacular trip over the hack and Robin found he was a bit breathless, but he put it down to his big belly crushing his lungs when he sat down in the hack. Haz on 40 fags a day was the picture of health.

But at least the sun shone and I went go karting for the first time ever. But Haz accused me a being a ‘Noddy’ driver having overtaken me twice. 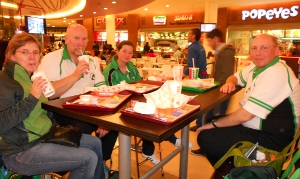 Quite a week as always summed up by the fact that when we finally discovered Erzurum had a Burger King we nearly burst into tears of joy.

It was a different curlers on tour experience, certainly, but always an honour to represent Ireland.