For us, the Lithuanian match was a must win. Sadly, must doesn’t translate to can, will or did. With painful defeat still fresh in the memories of both teams, we took the ice and began to feel how each other were playing.

A slow start to the game was followed by the Lithuanians taking an early lead. A positive fifth end from Team Ireland brought us into the break with good spirits. A steal in the sixth end brought us back evens – everything was left to play for, or as Dave puts it “I could have been in bed for an extra hour”.

Unfortunately, we weren’t carrying the luck of the Irish wasn’t with us for this game – In the end the Lithuanians got the better of us after a few high scores – the ninth end had to be a win after a disappointing pair, and Losing a 1 forced us to concede.

Post-match, a questionable lunch of what appeared to be spam and smash was ‘enjoyed’ before an early afternoon excursion to catch the first few ends of Scotland – Norway in a sadly empty looking arena:

Discussion was had on many game elements whilst appreciating the quality of shots happening before us – It turned out to be a fantastic wind down after the previous match, and a suitably peaceful precursor to the next game. Sadly, however, none of us managed to appear on Eurosport or the big screen as far as we’re aware.

The game against the Dutch boys was a satisfying match. As in previous games this week, we raised our game to match theirs and put in one of our best performances to date.

Tom Roche and Craig Whyte were rotated, with Craig comfortably filling a large pair of shoes as lead. Tom, never one to sit by and watch others working hard, adapted to his new role as the iPad wielding end-by-end, shot-by-shot analyst.

A further refined practise session lead us easily into the beginning of the match – the first few ends were the teams testing one another – the Dutch boys, as far as we saw, were pinpoint accurate on their bigger weights and their draws were well considered and placed.

From then it proved to be enjoyable for all on-ice members of the Irish squad – we all played as well as we have this season and had a good match with the Dutch boys. We went into the fifth end break positive and happy with how the game was going, but in the face of triple-takeouts and relentless play, scores slipped in their favour. 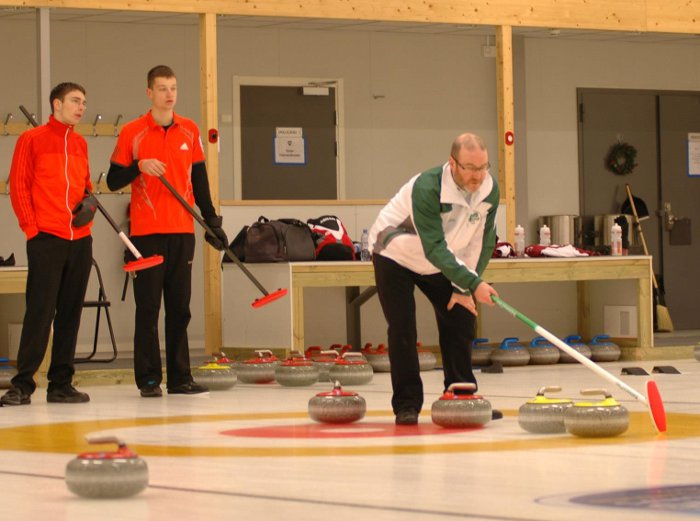 Compared with previous games, the approach taken was much more aggressive – more freezing, drawing and careful guarding shots were brought into play, proving troublesome to the Dutch. Sadly, their big weights and quality of play proved more troublesome for us. 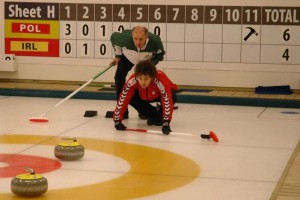 The game against Poland was never to be an easy one. Similar to us, they’d had a mixed competition – a big loss against the Belgians yesterday and some early success.

We went in looking for a good game – the last few days have seen slight change to more aggressive tactics, and this continued through this game. The Polish were more than happy to respond – from the get-go we had busy heads, draws and freezes.

Despite losing a 3 very early on, we had the good game we were after – a variety of interesting shots were played with a spread of results on both sides. Again, the Polish had a good sprinkling of the luck we’ve failed to grasp. In the end, their experience won over – to get back in the game, Team Ireland played a big gamble on the 8th end – sadly, the guddle we went for worked against us.

The big take away from today and previous days is to never underestimate what you face – the B-League has a fantastic level of play, and many talented and well trained squads putting in excellent performances. Whoever is relegated from the A-League might be in for a shock from the teams awaiting them.

At this level, we’ve come to understand, experience counts in everything you do – shot playing experience, knowledge of how the competition runs, the ability to play under time pressure and understanding of what you’re coming up against in other games. Returning from the competition, we’ll be a much stronger team and more aware of what has to be done in the next round. Despite all this experience we’ve gained, there’s still plenty of things to be learned, tweaked and iterated upon in the near future.

Written from Sweden by David Hibberd