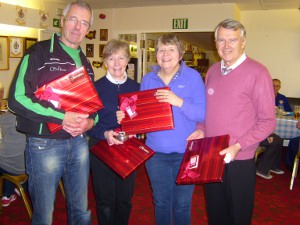 Held at the Green Hotel Ice Rink, Kinross in Scotland on Sunday 10th February 2013. For this bonspiel, attending members were divided up into six rinks who are drawn to play against one other rink.

Thanks to our Kinross friends for making up the numbers, and also a warm welcome to our potential new members and our guests.

Full results and teams were: