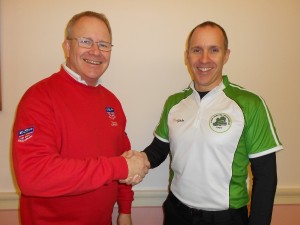 TWO curling-mad brothers are heading for the World Senior Curling Championships in Canada next month – one to represent Ireland and the other to represent England.

Fifty-year-old Neil Fyfe will throw second stones for the Irish men while his 52-year-old brother Alastair will travel as the English fifth player. 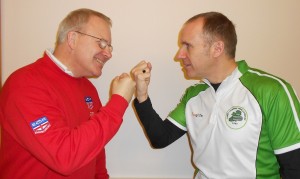 For police officer Neil, who lives in Portpatrick, near Stranraer, this is his first trip to the World Seniors although he has previously represented Ireland at the European Championships ‘A’ league in 2006 and 2008 and ‘B’ league in 2007, 2009, 2010 and 2011.

On the other hand, this will be Biggar resident and Transport Scotland rail boss, Alastair’s first trip to an international curling event.

They qualify for international duty because their father, the late John Fyfe, was English, and their mother Isobel is Irish.

Proud mum Isobel said: “I hope they both play well, enjoy the experience and I am just sorry I’m not going to be there.”

The two teams are in different sections of the competition so the only hope of the brothers playing against each other would be in the knock-out stages.