Ireland is represented in this weekends Hammerheads Trophy in the Netherlands – Alan Mitchell, John Furey, James Russell and Arran Cameron have entered a team as part of their European Mens squad training – good luck.

James reports: “Played last night (Friday) and beat a team called House Rules. We all agreed we could have played a lot better but finding the right ice was tricky on the sheet we had. But a win is a win. Came down to the last end and we were textbook with the hammer and got a deserved 3. Then at 8 this morning we played New York Pizza team (who I think challenged for the Dutch championship) in a much better game than last night. Still on the tricky sheet but we played well. Should have killed the game earlier than we did but the ice caught us out again so in the last end Alan was left to draw the button against 2 with a guard blocking the easy way in. But at last the funny ice was our friend and the stone drew enough and we out counted them by less than an inch. We should now be in a quarter final at 6pm but we’re not sure who against as there are games still going on. On the whole morale is up and we’re feeling keen for more.”

Update from James late Saturday night – “We had a fantastic game against the Dutch junior squad (who were skipped by their coach as their usual skip had to go to work). The game was great, both the result for us and the play throughout.

After getting the hammer for the first time in 4 games, we capitalised right away by taking a 2 (although we narrowly missed out on a 3) This got the game off to a positive start. We were close to a steal of 1 in the second but some clever play from the young Dutch vice skip secured the blank for the juniors. They went on to take a 2 in the 3rd to level the score and hand us back the hammer. Sadly, through a breakdown in communication, we managed to have an end stolen from us for the first time in the tournament. The score now sat at 3-2 to the Dutch.

After the steal we had a focused yet short team talk and we were back in the right mindset to bounce back with a 2 in the 5th end. To upset the rhythm of the game further we managed to snatch ones in both the 6th and 7th ends. Sitting 6-3 ahead against the hammer going into the last end we were feeling quietly confident.

We played the clean end, removing their stones from the house every time they had a look in and eventually we ran them out of stones, at which point they conceded the game to us. We are now set up to play a semi final grudge match against the current Dutch champions Van Dorp.

The same team that showed two of our team exactly how to beat the Irish a few months ago in Sweden at the Europeans. But we are back with a greater understanding, more experience and most importantly of all more confidence in our ability to function as a team. Fingers crossed for a superb game at 9.30am!!”

Skip, Alan Mitchell, summed it up: “Nervy win against Dutch juniors and into semi final in morning v Dutch champs ‘van dorp’. Need to play at our best to have a chance.”

Team Irelands third, John Furey concludes “We finished the Hammerhead Trophy with third place after a good game against Van Dorp which we lost and a bad game against AwesomeSauce, which we won”

It is not all curling though …. 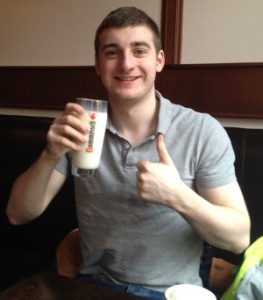 James enjoying the aftermath of his miking! 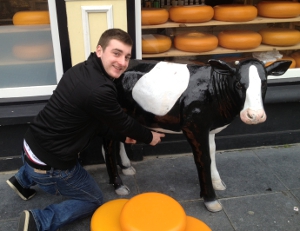 James Craig milking it in the Netherlands