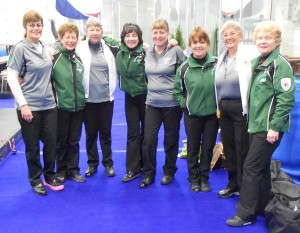 OH dear. This was just a nightmare game for the Irish girls. After the New Zealand team had taken a two at the first end and stolen a one at the second, we had a straight forward hit for a four at the third but for the upteenth time this week we didn’t take enough ice and Marie’s stone just clipped a front one giving up another one. After that it went downhill against a team that were outcurling us. We managed to get on the board finally at the fifth end when Louise froze on top of the New Zealand stone right on the button. Marie drew on top of that one to lie two but the Kiwi skip played a nice hit to roll Marie’s to the side and Marie’s last draw for two was heavy. That was the only highlight I’m afraid.