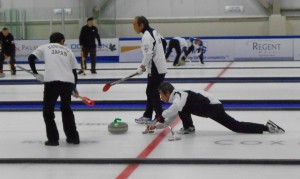 THE Irish mens team are out of the World Senior Curling Championships here in Fredericton after losing 8-4 to Japan this morning. Skip Peter Wilson had command of draw weight from the draw shot challenge and drew for one at the first and stole a one at the second after the Japanese skip hit and rolled in for second shot when he had three counters against him. In the third attempts to get an Irish counter behind cover failed and the Japanese skip hit for two. The crutch the skip uses was likened by Johnjo to a towel rail – certainly never seen the like before. In the fouth PJ had a great hit and roll to freeze on top of a Japan stone on the button. Japan then freeze that to try and stop the two but Pete elects to hit it at an angle to jam it on the back stone for two but gets it too thick and when the granite settled the Japanese stone was the shot. In the fifth  the Jap skip  drew to the four to lie two and Pete was heavy when trying to follow him giving up a two. The world title was hanging by a thread now but both Johnjo (with hits) and pete (draws) played great shot at the sixth for a two. But the wheels came off in the seventh. Japan were lying two, but all of the eight foot was open on Pete’s in turn, but he elected to play a very tricky double on the out turn that didn’t come off and the towel rail drew for a three. The end was nigh and we were run out of stones, and hope, shortly afterwards. 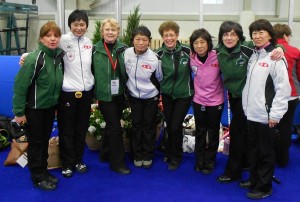 THE ladies enjoyed their game against the Japanese ladies and with Louise playing second stones and Gilly at third it was a change that was worth trying. We still lost mind you! But we had a good end when getting the three with Marie nailing the draw to the button for three through a port. The most important thing we took from this game was learning how to say ” thank you” in Japanese.

IT was a meaningless game but the Irish team showed what they were capable of doing by hammering the Czechs in their last game at this year’s senior world championships. Johnjo took over as skip to give Pete a rest and the team never looked in any trouble from the first end until it was all over at the end of the sixth when the Irish were out of sight. I didn’t take notes for this game but sat back and watched a game that, talking about it afterwards, gave them all a good feeling about having played in. Ireland finish on a won 5 lost 4 record.