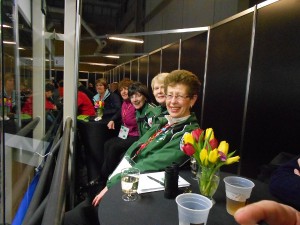 Sorry folks, I had a day off yesterday from blogging to go and watch the finals but now I’m back!

So….this is just a round up of bits and pieces of what’s gone on this week off the ice as they pop into my head. The first shock yesterday morning was hearing that Austria had beaten Scotland in the ladies semi-final. When I spoke to 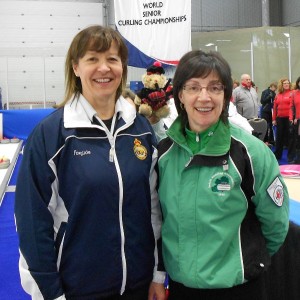 Christine Cannon later she said she could not believe the number of raised double take outs the skip made in the game. Of course, as I reminded her, they wouldn’t have been playing Austria at all if we had beaten them the day before!  Anyway, the Austrians put up no sort of opposition to Canada in the final losing a six at the first end. You could see they were just delighted to be there and just shrugged their shoulders at the scoreline. The best game was the Scotland v Sweden bronze medal game. Ingrid and her team were out-played for most of the game but kept just hanging in there and making the Scots make their last shots. It went to an extra end and although Christine’s girls had got two in the house Ingrid just had to bite the eight foot for the win and played it perfectly.

The men’s title went to Canada who beat the New Zealand men who were the surprise of the week. Their skip also played in the mixed doubles, arriving for his seniors games at about the third end. It was an emotional week for them as Pat Cooney’s wife Carolyn had a stroke on the first day of the competition. A silver medal is a little consolation for the tough road they have ahead of them. She will have to stay here for some time yet but the curling community have stepped in with offers of accomodation and help. 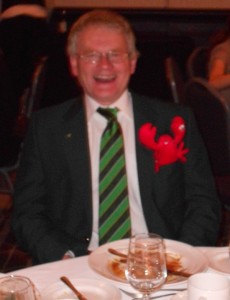 The Irish had their own health issues with PJ so ill with man flu he went to bed on Thursday night and didn’t surface until Saturday afternoon. As Neil put it: “Imagine spending all that money to come here and then spend two days in your bed.”

THE closing banquet was a bit of a disappointment. The “do” was supposed to kick off at  9pm but as there had been an extra end in the senior ladies bronze game and the mixed doubles final it started about an hour later. Then there were the speeches to listen to before the meal. Best moment was when Kate Caithness asked the Hungarian mixed doubles gold medallists to 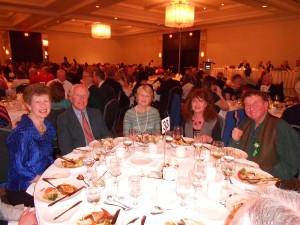 come up to the podium to do their bit only to be told they were at the pizza place down the road! Don’t blame them we would have been better there too. The meal was very ordinary. The chicken was tasteless and considering the food was served an hour later than scheduled the carrots were more than al dente. Raw was the word. As Gerry commented : “I’m glad we didn’t turn up early.” 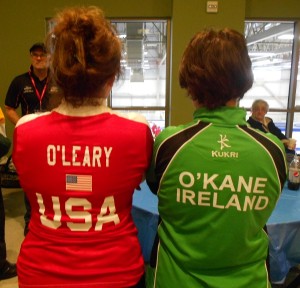 A whole lot of shirt swapping was going on as usual. Everyone seemed to want to swap with Pete as he had an armful of shirts either going out or coming in. Marie did a great swap with the wee O’Leary wumman from the USA and I was delighed to get a top from Jenny Riordan from Australia as Reardon was my mother’s maiden name. The goodies you get from other teams are amazing and they put a lot of effort into giving you unusual gifts. My favourite was the Japanese goodie bag containing Hello Kitty socks and a GREEN Kit-Kat!

THE organising committee did a great job on the whole. The buses didn’t always run quite as they were supposed to. One night we waited at the players entrance for the 6.15pm bus until 7pm only to discover it had gone to the front of the arena. But the courtesy cars were a blessing as there was always a volunteer falling over themselves to drive you anywhere you wanted to go.

We were amused that the food bar in the area seemed to be manned during the day by octogenarians. A novel take on ‘care in the community’ New Brunswick style. It maybe took a while longer to get your hot dog and fries and the digital till seemed beyond most of them, but then were so cheery and interested in where you came from and how you were doing it didn’t really matter.

The hotel was great and the beds were TO DIE FOR!! Christina will miss my “I love my bed” mantra every night as I slid between the sheets. It was the mattress topper that did it for me. 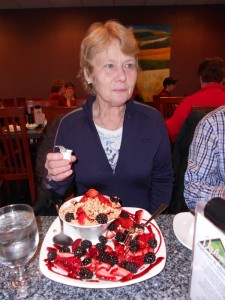 The Diplomat diner next door was a great place to eat as it was open for business night and day. After the boys last game a few drinks were taken in the hotel bar.  At three in the morning, Johnjo, Gillian, Neil and Tom went over to the Diplomat for a steak and eggs breakfast. Gilly Drury’s yogurt and granola choice one morning would have fed the entire team.

That’s all I can think off just now. I have been distracted by the sight of Big Chris and Izzy Hannen dancing like Fred and Ginger though the lobby for a New Brunswick film crew.