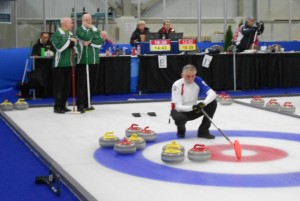 Tricky last stone for the French skip after Pete lands on on top of his two counters.

THE Irish men had a comfortable win this afternoon against a French team who helped matters considerably by having a skip who was not on top of his game today. A three in the first end was the building block for a 5 -1 lead at half time. Pete’s last stone in the fourth end was a excellent double take out for the one. After stealing a two in the sixth, Neil went for a seat on the bench to let Tom on the ice to stretch his legs. Absolutely nothing to do with him but the French were suddenly lying three shots when 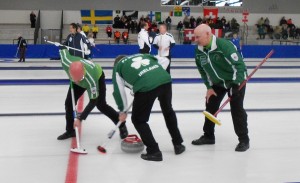 Pete went to play his last stone! His attempted freeze was almost perfect, but sat shot slightly in front of two French stones giving them a squeak of making the four if he chipped it out (picture attached) but the French skip was wide and heavy and it was handshake time. 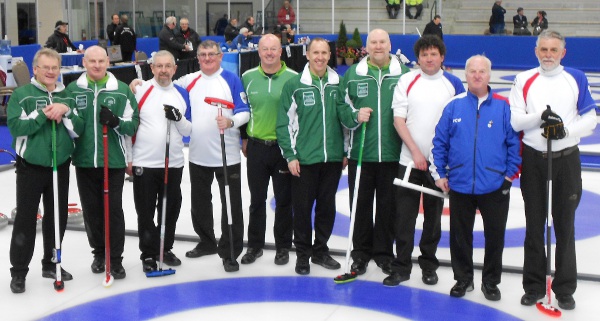 CORRECTION – I have been getting pelters, as usual, for saying they were out of the running this year. Of course, technically they are not out but they need New Zealand to lose two games out of their three remaining ties. This misinformation was gleaned from Neil last night who was on the worse side of three alcoholic beverages and was sure that the door had slammed shut on the gold medal. However, all is not lost after all but keep your fingers crossed. Not blaming Neil by the way. I should have checked with someone who can count. 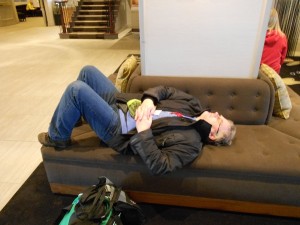 man flu strikes down even the toughest ones.

ILLNESS – Since we arrived one by one we have gone down with the cold. I got it first, then JJ was full of it, PJ was next and he was feeling so grim last night he went off to bed at 7pm and could hardly get off the hotel sofa when the bus arrived to take them to the game today. Skip Pete said at lunchtime he thought he was coughing up blood this morning but decided it was just strawberries. We are blaming the air conditioning vents in the arena that blow cold air down the back of your neck if your are sitting in the stands. JJ’s Gillian, who is an authority on the ice rinks of the world, reckons only Monthey in December 2010 was colder. You are fine on the ice but when you come off it catches up with you.

TRIVIA – the strangest scoreline and the one everyone is talking about is Australia’s ladies beating the Finnish women 11-10 after an extra end. The Finns were 10-0 up after three ends and then managed to lose 11 straight shots over the next six ends.Three twos, a three and two singles. And it went to a measure in the eighth which the Aussie’s won! Ladies curling…………