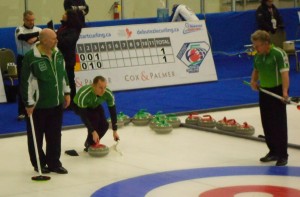 THE Irish men’s team got their country’s defence of the men’s senior title off to a good start at the World Senior Curling Championships with a win over Scotland. The team had struggled with weight control on the very fast ice over the first few ends, and the Scots capitalised with a three in the second end. The Irish could have levelled the score at 3-3 in the third, but skip Pete’s last stone was heavy. It stayed at 4-2 for the Scots until the seventh end when Pete hit and stuck when trying to blank the end. One down and chasing the game, the turning point in the last end was Pete playing two great draws under pressure. His first drew to top eight behind a covering stone. Scotland’s skip David Hay tried for both stones but just lifted the first one. Pete then drew back four, at seven o’ clock, tucked in behind his first draw. David Hay was then heavy with his last stone gifting the Irish the steal of two and the win.

The same four will take to the ice in tomorrow morning’s game against Switzerland with Tom Roche coming on against New Zealand later in the day.

THE ladies had a difficult start against the home team and losing a three in the first end didn’t help matters. But skip Marie kept her head with two great draws to get the team on board and they played with more confidence in the second half of the tie. But at 8-2 down after six they shook hands.