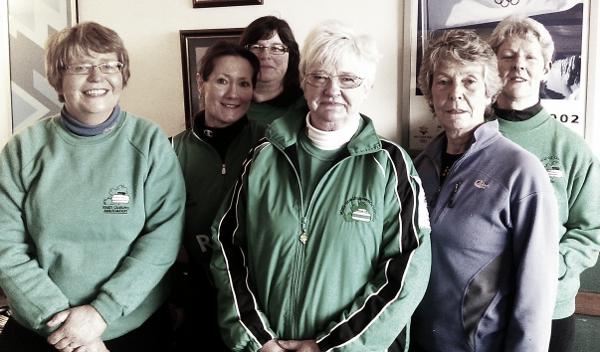 Although this came at the end of the current season it was attended by 5 members, Yvonne Chalmers,Frances Donald, Susan Scotland, Claire McCormick and Charlotte Tierney. Gordon McIntyre (Coach of the Irish Men’s Senior World Champion team) was in charge of the day.

We began with some gentle warm ups followed by an on ice delivery assessment of each player. When deliveries had been adjusted and Gordon was happy with the improvements then video and laser beam technology were used to record each delivery.

After lunch much discussion took place during the playback of the videos and everyone enjoyed “seeing oursel’ as ither’s see us”. Back on to the ice again to try out the new deliveries.

We then moved on and some time was spent in learning and applying split timing. This was followed by the players sweeping skills being analysed and the session finished with one end of curling being played to assess the ability of each person to judge correctly the sweeping of each stone.

Everyone enjoyed the day and wants to thank Gordon for his help and enthusiasm. Each person learned something new and will look forward to applying her new found skills next season.

All asked that these squad sessions can be continued next season and I was happy to inform everyone that the committee had this very much in mind.

This event was organised and reported on, by Carolyn Hibberd (ICA committee member)