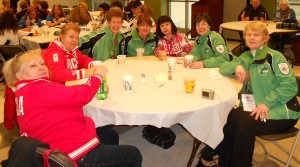 THE Irish ladies got their first win here today at the World Senior Curling Championships in Fredericton when thy beat Russia 8-4. This was a bizarre game. The Russian ladies could only field three players as one team member’s father died last night and she had to fly home. We got a good two at the first end and were looking good for a two at the second but Louise wanted the girls to sweep for a catch on a front stone to block the four foot but it caught the stone too thick and punted it in the open on the edge of the button. The Russian skip absolutely nailed the hit. It was obvious they had taken on board advice after getting a curling lesson from the Canadian coach! They then played out of their skins making hits and rolls and stealing shots at every end. At one point there were only two Russian players on the ice, don’t know where the sweeper disappeared to. Anyway thankfully we guddled in the seventh and Marie had a great hit for a four. In the last end we ran them out of stones but the skip refused to stop the game! The umpire had the score card under her nose but she was pushing him away to give ice!

After Italy got a right gubbing last night this should have been a nailed on win for the Irish team but it wasn’t to be. The faces were a bit long when I came in, but later Neil said they hadn’t played badly and Pete had kept them in it during the first four ends but a hit and roll that went just the wrong way in the fifth end got them into trouble losing a one. In the last end the Irish were lying one at the back of the eight when Pete came to play his last stone but the Italians had second shot. Pete elected to draw for second shot to put them under pressure but he was a tad light and it ended up shot and directly in front of the Italian stone. The Italian then hid the back Irish stone and rolled out leaving Pete a shot to hit his own one straight back into the Italian one for two but he took a wee bit too much ice and halfed his own one out leaving them lying one for the 5 -3 win. JJ is suffering from a heavy head cold and PJ came on as the sub. His knees are holding up but the slide is getting higher and higher every game.

THIS went to an extra end and when the Norwegian skip drew the four foot the Irish knew they were out of this year’s competition. Pete had a great game and as he said himself he played “like a ******* trojan but still we lost”. Most of the ends were hits for one but Pete played a great angled raise on a shot  at 3 o’ clock on the edge of the four onto the Norwegian shot sitting back four, behind the guard, to take it into an extra end. The last end was a case of Neil and PJ putting up centre guards and the Norway boys peeling them. JJ second stone was a hit and roll in off off the Norwegian stone behind the Irish guard.  Norway’s third peeled the front guard. Pete hit and rolled off the Noway stone that had creeped into the house to ten o’ clock on the 12 foot, getting behind cover. We were lying two in a line so the opposition skip took off the top one.  Pete drew to the top four to lie two in a line again but the Norwegian skip kept his cool and drew into the four foot for the win.