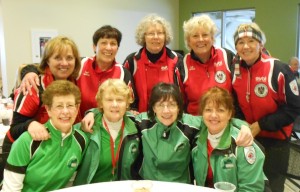 THE girls from Ireland had a great last game here in the World Senior Curling Championships when they were so close to either beating Austria or at least taking them to an extra end. The Austrians got a three in the first and the Irish came straight back with a three in the second. On extremely keen ice the girls got their weight at last and after losing a one at the third got a two in the fourth end after Marie played a perfect weight draw. The Austrians got on buried in the fifth and Ireland took a one in the sixth when they should have had a two or even three but the team decided to draw for the two, when lying one, rather then tap or split a stone in that was a couple of inches short of the house. Unfortunately Marie was heavy. They lost a one in the seventh and then went into only their second eighth end of the competition. The Austrians got a stone in behind cover early but Louise and Gilly cleared the covering stones. The Austrian third was heavy with her guard and sat alongside the shot in the house. Gilly went for the double but only got the one. The Austrian was heavy again and set up another double. Marie had a go at that double, only getting one, but lying second shot. The Austrian skip guarded again but left options on. Marie initially though about the tap up on the Irish second shot but Louise suggested hitting the Austrian guard back three feet onto the shot. The team took a time out to discuss what to do and decided to go for the hit but it didn’t come off and the Austrians stole the one. Gilly’s husband John said he overheard a Canadian in the crowd saying: “Where have the Irish been all week? They CAN curl.”