I just made it in to see the last end of the game when the score was four all. Pete’s last stone had to bite the button for the win but the sweepers were onto it too late and, even with four of them hammering into the ice, the stone ground to a halt top 12. That left the Swiss stone in shot position. The boys were naturally disappointed but this is a marathon not a sprint and they will take it shot by shot, game by game just now. Tonight the opposition is New Zealand who had a cracker of a game against Scotland, during the same session, taking a two to win in the last end.

The woman were caught out with the very swingy ice in this game as seven foot draws are not often encountered on curling ice back home. Hits, draws and tap backs were sailing past their intended target and it is a case of sweeping from the hogline all the way instead of waiting till the braking point when it is already too late. Marie again played two great shots against a pile of opposition stones and it was a relief to get to the end of the sixth to shake hands and go for a beer. 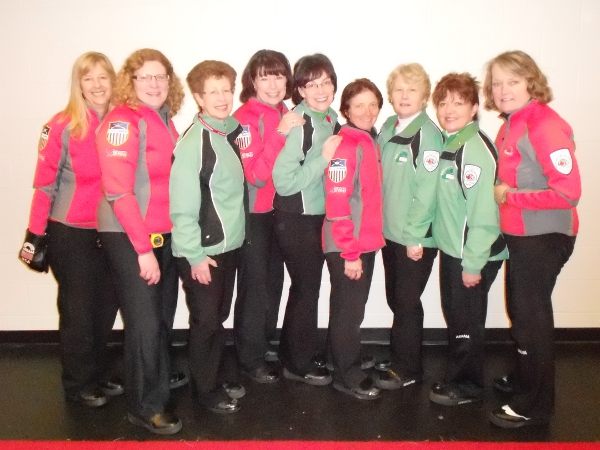 That is our two toughest games out of the way now so hopefully we can learn from our mistakes and get a win on the board before we go home! The ladies have a day off tomorrow. Back on Tuesday to play Russia who were blown away by the might of Canada 21-1. But they kept smiling too!

The perils of seniors curling was highlighted yesterday when the New Zealand women’s second player collapsed on the ice during their warm up. She was stretchered off the ice and rushed to hospital with a suspected stroke.