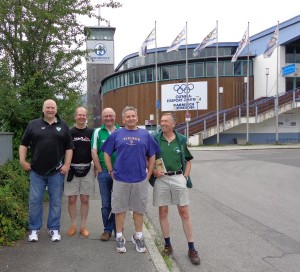 Famous Five arrive at the Olympic Stadium in Garmisch

The Famous Five and their cohorts successfully negotiated their flights and transport to Garmisch last night. The Skipper had taken a leap of faith and ordered a ski shuttle taxi to meet us at the airport in Munich. Imagine our surprise and delight when there was actually someone there! More than that the taxi was a small luxury coach so smiles all round. An hour and a half later (during which Bill had felt it necessary to try every seat on the bus) we arrived at the Hotel Bavaria. A trip out for food took us to a McD’s – it was nearly midnight – and as we tried to make sense of the menu a plaintive cry of “beer beer” or was it “bier bier” came from one of the teams girlies. Yes, in Garmisch, the McDonalds sell bier!!!
Looking forward to tomorrow to see what the tour guide has in store for us – oh and the start of the curling. On at 1500 CET.