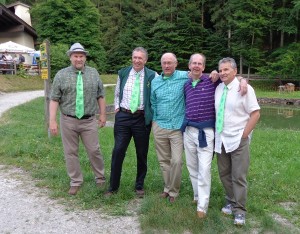 Saturday dawned very sunny indeed with sky now clear and spectacular views of the mountains surrounding the town. Quite majestic.

Game time was 10.15 today with the prize at stake – no early game on Sunday! The skipper sat this one out and with Bill taking the helm, the Frazzled Five took to the ice against a decent Swiss team (NB. A lot of Swiss teams in this tournament). A loss of 3 in the first end was not a good start but the boys battled back to lead 4-3 at the 3rd end. Catastrophe followed with another loss of 3 following a poor tactical call by BG when a safe draw would have given up no more than a two!!……..More trouble was to follow as the opponents took full advantage and ran out 10-4 winners. The sweat was on as the drop zone was 28th place.The defeat was alleviated somewhat but the fact that the changing rooms are communal. Need I say more, Tony??

Relief all round when the rankings left us in 24th place and another game at 5.15. In celebration some of the team took to the swimming pool while others kept an eye on DH to make sure he didn’t go AWOL again!!

The game at 5.15 was an entirely different affair. Now that the sections had come together it was all to play for again. With DW sitting this one out, the Big Man was back at the helm. A 5 in the first end set the team on the road to victory by 17-3 winning 6 ends. After this round of games was complete, the team are now sitting in 15th place. With the top 12 qualifying for the final round of games, it’s all to play for again on Sunday morning at 12.30 when a good win will likely put us in the top 12. Here’s hoping. 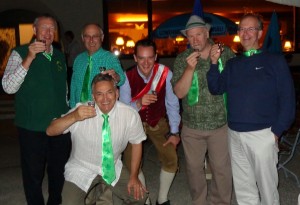 The entertainment tonight was a Bavarian evening at a restaurant near the mountains. Again a fantastic setting. The boys were resplendent in their shamrock ties(!!!!!) while the girls were looking on admiringly ( yeah. Right!) Johnjo had set the tone with his Bavarian hat but as I had suggested before, lederhosen was definitely not on the radar!! 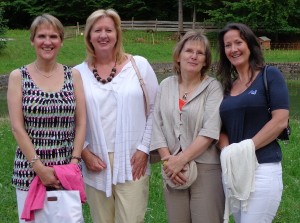 The night was completed by a round of Schnapps, courtesy of Florian Huber (remember him, Louise? ) and the day drew to a close without any major incident, thankfully!!

On to tomorrow with prizes at stake.