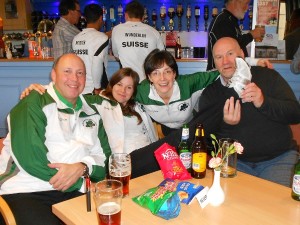 THE Irish finally played the way they know they can today in the last draw of the championships here in Edinburgh – but it was too late in the day to salvage a play-off place.

But thumping Denmark 9-1 gave the team a bit of pride back after a torrid European mixed. The Danes, by their own admission, certainly helped the Irish cause as their skip, the affable Joel, could not buy a four foot draw. But, he was trying to pull off big shots at each end because the good tactics from the Irish team put Denmark on the back foot.

The killer blow was a three at the fourth end, when good draws behind guards by the boys and girls in green meant that the Danish skip only had a hit and roll in on a stone at the back of the 12 foot to salvage something. But he hit the stone square on the nose and Robin had the simple task of following him down to hit and lie for the 3.

The Danes were keen the get off the ice as they were straight back on again afterwards and shook hands at the sixth when they gave up a final single after Robin had just about frozen on top of their stone on the back of the button, lying shot by a whisker. Joel really had no shot on and only suceeded in clipping the Irish stone onto the pot lid.

So that’s that  – we all know the script by now – could have, should have done better.

Skip Robin commented: “Disappointing to beat such a good quality team in the last draw when we struggled so badly earlier on. Still, only one win away from the playoffs – a familiar story. I think to be honest we just didn’t match the stones well enough when it was crying out for that in practice. Such poor quality stones really shouldn’t happen at a WCF event. Too many silent take outs and missed draws for us as a team and lack of practice shone through. Still we threw an almost 100% game today against one of the favourites so there is life in the old dogs yet. Roll on the Seniors!”