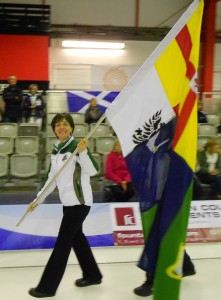 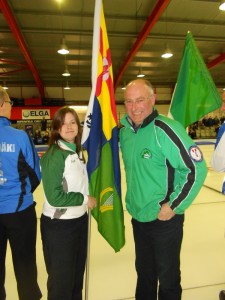 It’s half eleven on Friday night and Hazel and I are back at our rented abode stuffing our faces with pepperoni pizza after watching the Euro Mixed quarter-finals.

Scotland saw off Denmark, Germany downed Slovakia and Finland roasted their Nordic cousins Sweden to go through to tomorrow morning’s semis, meaning that the C Group that Ireland was in produced three of the eight quarter-finalists.

As the other three games had, finished  all eyes turned to the last couple of stones in the  last end of the Hungary Switzerland game. The Hungarians were one up, but the Swiss were lying two shots, on top of four and at three o’ clock on the four foot, guarded by a stone just short of the rings on the centre line. Hungarian skip Gyorgy Nagy had to pull off a monster of a shot by cold drawing to bite the one foot. A hush decended on Murrayfield as the stone glided down the ice. Was it heavy? Noooooo, Gyorgy did  it in style landing it plum on the edge of the pot lid, bringing a standing ovation from the crowd watching.

The ashen-faced Swiss were understandably gutted.

Now that the curling is over Haz and I had to get off our ars*s and tidy up our wee hoose in Corstorphine. Having used every available dish, cup and glass there was a mass washing up session and a load of laundry done. Newspapers two feet deep were chucked and a kilo of Pringle crumbs hoovered. A window cleaner even arrived.

We were so exhausted we had to have a wee lie down, but in the afternoon we took ourselves off to cheer on the Spanish in their play off against Hungary at half two. As were were watching the game, Jim and Kathie Nixon appeared and announced they were here to see Ireland. A day late I fear as we wus demolishing the Great Danes at half two on the Thursday not Friday. Poor crestfallen Jim and Kathie had to console themselves by heading off to Mackro.

Hard to think we have been here for a week now – feels like a month.

I’m off home to the remote south west corner tomorrow, so I’ll probably do a post mortem next week from the land that KFC forgot.