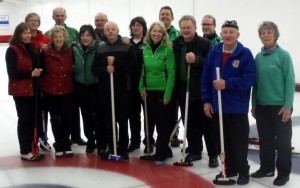 The venue this year was Greenacres Ice Rink, Scotland, on Tuesday 1st April 2014, followed by tea, coffee and sandwiches.

The competition is two teams from each club who play a single 8 end game each and the aggregate score across the two rinks determines the winner. This year the trophy was retained by Ardrossan with an aggregate score of 19 stones to 9.

Thanks to the ICA’s two teams of