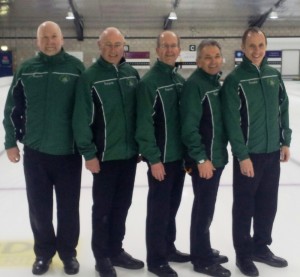 The Irish mens’ senior squad and the Irish mixed doubles pair were all at Dumfries Ice Bowl at the weekend for some practice ahead of the world seniors and mixed doubles championships.

They were lucky that teams from other nations were also at the Ice Bowl for the same purpose and bounce games against the Scotland ladies seniors team and the Welsh mens seniors team gave Johnjo, Bill, David, Tony and Neil the chance to sharpen their competitive teeth ahead of the white-hot heat of the world championships.

Jojnjo said: “We had an excellent two days of practice not only playing lots of stones and playing out a variety of scenarios against other teams and ourselves but also were able to refine pre-game routines and some of the other bits and pieces that can be very important during the championship week. It was also good to be in Dumfries, and while we didn’t learn anything about the ice conditions (the stones are being refurbished this week and the ice was being melted down a bit today) it was handy, and of course very valuable, to discover the best dining establishments and purveyors of hard alcohol for our support crew. It was a difficult task but someone had to do it! Seriously it was a worthwhile weekend and I certainly appreciate the commitment of all the guys to travel down to Dumfries for the complete weekend given we are all going to be away from home and work for another 10 days or so in just a weeks time.”

The mixed team of John and Louise also played two games against the Wales mixed doubles pairing of Adrian Meikle and Dawn Watson.

Adrian and Dawn were very glad of some opposition as they hadn’t played a competitive mixed doubles game until Saturday morning! They didn’t have a challenge for the Welsh berth at the championships so were taking the ‘no stone left unturned’ preparation format to the extreme.From a personal point of view we felt the better of the practice games but I was knackered after playing 16 ends as John is now insisting I get up and sweep my own stones! At one end he enquired, with a hint of menace in his voice: “So, Louise…..are you GOING to sweep your stones?”