It was all going so well in our first mixed doubles game at the world championships until the seventh end where we made a compete Horlicks. 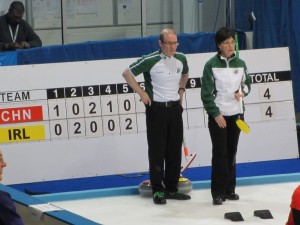 After losing a one at the first John Furey had two superb shots in the second, getting shots right behind guards and once we were on the board we settled down. The ice was much quicker than at yesterday morning’s practice when a draw was 2.60!

There was a loss of two in the third and my last draw in the forth stopped an inch short, but we got a two in the fifth, should have been a three but I was woefully short with my last draw.

We played a good end in the sixth to force a one but ran into all sorts of problems at the next end when my first stone was too heavy and, as you cant hit until the playing of the fourth stone their shot shone that I knocked out was replaced. That put us on the back foot and with the Chinese lying three when I went to play my last stone, I was left trying to hit  a quarter stone of the second shot stone on to the shot stone and spin them both out to just lose a one. It drew too much and raised their shot onto our stone on the back four foot to lose a four. Damn.

Ah well, as Scarlett said to Rhett, “tomorrow is another day”. Next up – the French.