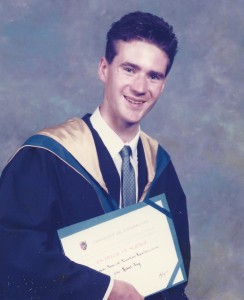 Earlier curling related memory – I remember a skip calling an impossible draw for me to perform against six or so stones in the house, through a couple of staggered single stone width ports. I made it and just remember everyone been dumb-founded, including the skip who called the original shot. It was possibly the first time i thought, hey this sport’s not bad.

Favourite curling destination and why – Karlstad, a nice wooden cottage in the woods and a foot of snow outside. Absolutely lovely.

How do you relax away from work (and curling) – Playing violin.

The person you most admire, alive or dead, and why – I was lucky enough to meet with tech uber guru Donald Norman back in the 90s. One of the things he said at the time was that mobile computing was the next big thing. I’ve been doing mobile computing ever since.

The unlikely interest that engages your curiosity – I’m turning into a twitcher as a by-product of my youngest son – Ari. I can now distinguish between Collared Doves and Chaffinches.

What is your favourite word – In terms of usage, the definite article.

What’s your biggest fear  – I don’t do heights.

Last gig you went to – Does Nicola Benedetti do gigs?

The film you can watch time and time again – Groundhog Day, there’s even some very satisfying self-referential integrity about watching it over and over again.

What are you best at – You’ll notice that my profile is last up. That’s because I’m super good at procrastination. However once I manage to start something I’m ok.

The sport you won’t watch – Ice Hockey. I can’t follow the puck. So all I see is human dodgems on ice.

And finally, what did you have for breakfast – Porridge (with cinnamon) and coffee.