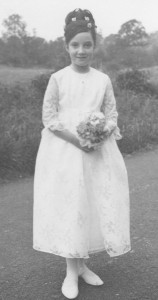 Earliest curling related memory ­-
Outdoors – During the Arctic winter of 1963, my parents took three-year-old me with them to Elrig Loch for an afternoon’s curling with Mochrum Curling Club. There were some older kids there ice skating, so a wooden box and a bit of rope were found from somewhere and Sandra Jesson spent the afternoon towing me round and round the loch. When the sun went down and everyone was packing up to go home they remembered me. My father tried to lift me out of the box but my backside was frozen to the bottom.
Indoors – Before Stranraer Ice Rink opened in 1970, going to the old Ayr Ice Rink when Mochrum were playing and spending the three-hour session skating on the little rink cordoned off at the end of the curling rink (it was an ice hockey stadium). I just loved the cold atmosphere, the feel of the ice under my feet and the unique sound of the stones rumbling down the sheet.

Favourite curling destination and why – Garmish-Partenkirchen. I just loved the place – especially after the snow came. It was magical. Curling in the old 1936 Olympic Stadium was a bit special too. German engineering at its best.

How do you relax away from work (and curling) – Hacking out on my loan horse Tara and being a world class couch potato.

The person you most admire, alive or dead, and why – Ernest Shackleton. If you know the story of Shackleton rescuing all his men from the Antarctic in 1916, you realise you would follow him anywhere and trust him with your life.

The unlikely interest that engages your curiosity – The First World War.

What’s your guiltiest pleasure – A silk pillowcase to sleep on – a la Nigella.

What is your favourite word – Has to be ‘allegedly’. It can keep reporters in a job.

What’s your biggest fear – Forgetting to write allegedly or falling off a very high building. All that time to think on the way down.

Last gig you went to – Donny and Marie Osmond in the SECC, February 2013.

The film you can watch time and time again – A Man For All Seasons. The battle of wills between Henry VIII and Sir Thomas More over the King’s order to his clergy to break with the Catholic Church . Paul Scofield won an Oscar for his performance as More and no wonder. “I am the King’s loyal servant but God’s first”, said More. Henry chopped his head off.

What are you best at – Two things. Baking a Christmas Cake and setting a fire.

The sport you won’t watch – Any motor sport.

And finally, what did you have for breakfast – Fresh orange juice, black filter coffee and a Star Bar.