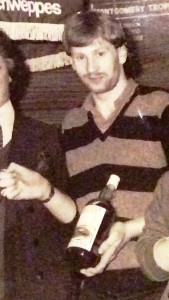 Earlier curling related memory – On a snowbound winters day circa 1972 when the entire UK sporting programme was wiped out there suddenly appeared this weird sport on the t.v. Highlights of the Canadian curling championships. A roaring crowd and all these long haired young (ish) guys in fancy, bright outfits wielding these fascinating ( and noisy) broomsticks. It looked fascinating and I was captivated. Then several years later when a curling rink opened in my home town I couldn’t wait to go in. It took me a long time to recover from the image that greeted me. A host of local farmers and shopkeepers (in slightly more conservative dress code than the Canadian’s I had witnessed).. propelling these granite blocks across what,to all intents and purposes, looked like an asbestos barn with an ice floor. And no roaring crowd what’s more. A few weeks later a local worthy kitted me out with a slider and the ubiquitous (in these days) knee pad. The worthy slid a stone perfectly down the ice and told me to do the same. I followed his down and with my very first stone I played a perfect in-turn ” chap and lie.” Mind you I didn’t realise at that point that my next successful in-turn hit and stick wouldn’t come along until 1997!

The person you most admire, alive or dead, and why – Easy… My mother followed by my father. Too many reasons to list.

The unlikely interest that engages your curiosity – American politics.

What is your favourite word – Turquoise.

Last gig you went to – Steve J Ward, my nephew…( check him out!)

The film you can watch time and time again – Cinema Paradiso….and I do. The edited clips sequence at the end gets me every time. Brilliant.

Something we might not know about you – I was once car jacked by an armed robber and then on escaping and returning to my office was jumped on by a dozen ” enthusiastic ” policemen who thought I’d been the bandits getaway driver. Try explaining that to the neighbouring businesses.

The sport you won’t watch – Motor sport of any type.

And finally, what did you have for breakfast – 2 coffees ( de-caff) and a cranberry cereal bar.