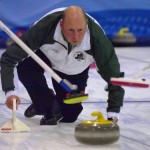 Having completed an open-topped bus tour of the Republic and appeared on The Late, Late Show, the skip of Ireland’s recently crowned European Senior curling champions finally had time to refect on his team’s victory in the Greenacres Invitation.

Robin Gray said: “I have to admit to being surprised at winning the competition primarily as the back end of the team have done no curling since early in the 2013/4 season. Its funny how often the new entrants to seniors in a number of sports appear to enjoy initial success on turning 50!

“We were rusty in closing out the opening game against England, but as the second game against Sweden wore on, I began to realise that we were all playing at a fairly competent level and that generally sustained and improved during the week. Our strategy was to play the entire week on a single guard where possible and keep it simple, and on the whole that worked. We executed it extremely well in the Sweden and Scotland round robin games, the latter which was our best. We only came unstuck in the final when temptation to guddle got the better of me and that turned out to be a very aggressive matchup in strategy. Through some great shotplay, we came out the right side of that but often could have been in trouble.

“The downside of that simple strategy is that close games are likely, and we had five last stone deciders out of the eight games. To win all of these would not happen all of the time, but last weekend we had the hammer in all and made it count. I think the ice suited us, the draw weight was on the slow side of average, swings were good but not crazy and that all works well for me.

“I was not sure what the standard of competition would be like in the Seniors, but given the prominent European teams were there, almost all games were challenging and every team was capable of winning any game. So a very satisfying week for Team Gray, but tinted with disappointment we have so little curling as we were unable to secure a route into the other main senior event in Edinburgh. Next stop is the Irish playdowns in Dumfries.”