Bill Gray with another update from the Four Nations at Fentons:
Ireland went down 32-25 against Wales in the Meikle Trophy after the completion of the Mixed matches. Johnjo and Bill skipped against Adrian Meikle and Chris Wells respectively. Right from the start Bill’s team were under pressure while JJ got off to a good start. Gambling all the way to overturn the 3 shot deficit after the men’s and women’s the battling Irish boys both ended up losing to their Welsh foes – but there good games on both sheets.
Play is underway in the final round of matches – mixed against England with Carolyn hoping to conjure up another cricket score as in the past two 4 Nations.

It has been another great weekend with lots of stories that can’t be told. With international debuts for Paul Cromey, Eoin McCrossan ( most of the time), Ross Barr, Jen Ward, Frances Donald and Gillian Russell.

Great times for the Irish. 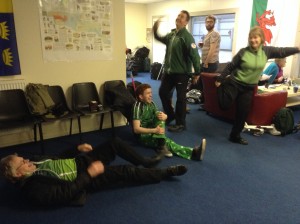 Here are some of the boys warming up!! (With physio Gillian lending a hand!!)