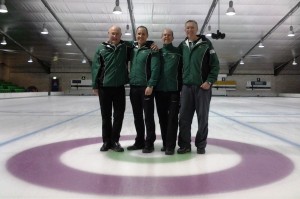 Congratulations to Bill Gray, Neil Fyfe, David Whyte and David Hume who retained their Irish Senior Curling title when winning the fourth game 8-6 in the best of five challenge against Team Robin Gray – in dramatic circumstances.

Team RG were 6-4 up with the hammer, but, drawing to anywhere in the eight foot for the win, Robin’s last stone picked half way down the ice, changed handle, and came up short of the rings, leaving the opposition lying four.

That was after Bill had played a great double (once again) with his last stone to put the pressure on Robin. it was a shame it ended that way, for the spectators anyway, who were all set for a fifth and final game.

Game round up – First end Robin had an open hit for a three but got it on the high side and rolled out. 2-0 to RG. Second end – Bill draws behind cover to be shot, just out counting two opposition stones. Robin tries to follow and push  Bill stone back but didn’t catch it thick enough. Bill’s drew for two but was too heavy. 2-1 Third end – Robin draws the button twice for a two. 4-1. Fourth end – Team BG play draw after draw, Team RG hit after hit and when Bill goes to play his first stone he is facing three stones. He hits the shot and sticks in the middle but when Robin tries to follow his barrier weight stone draws too far and catches a guard. Bill draws for his two. 4-3. Fifth end – There were shed loads of stones in play at this end with Team RG lying one shot with loads of cover. Team RG guarded any raise opportunities and tries unsuccessfully to double raise one of their own shots for two. 5-3. Sixth end – When Bill went to play his last stone the shot was against him behind a wall of stones, but as he had a counter a sitting top 12 he went for an angled raise on one of his front stone on the left hand side back onto the shot – going for a two. He played it well but the stone did not catch the shot fully and although the shot stone spun back to the back of the eight foot, with David Whyte sweeping frantically, it was still shot when it stopped spinning. 6-3, Seventh end – Pressure was on Bill again as it was shot against and a guard covering the it. But the draw to the button on the out-turn was still there and he played it to perfection. Robin had no option but to try and follow him and tap the shot back but he was light. Bill tried the same draw for his two but he was too wide. 6-4.

And the last end went the way of the title holders. 4-8 to BG.

Over the four games, it was a display of guts from the winners who were out-gunned from time to time, but they never panicked, kept  stones in play and either pulled off a big shot at the business end or forced mistakes from the challengers. Robin had three pick-ups that were crucial but that’s curling and his team to a man took the defeat philosophically  and will be back next year to challenge again for the title.

The Irish Senior Champions for 2015  – Bill, Neil, David W and David H –  were always going to put up a fight to “do it for Johnjo” lying in his pit back home in Crossgates with the flu, and show that with or without their talisman skipper they are a team to be respected.

So, The Worlds in Sochi? Ach, We’ll deal with the Sochi question tomorrow!