Robin tells us the story of the playdowns from his team’s point of view: 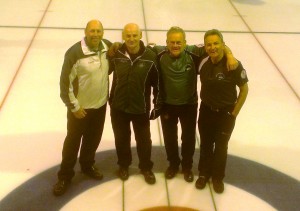 “We got a bit of a lesson at the weekend in that its never over till its over and ultimately, the reasons why we are not going to Sochi are down to our strategic failings. To have curled for so many years and made such fundamentally flawed tactical decisions at the end of games 3 and 4 was really unforgivable. Having done all the hard work to be in a comfortable winning position in both of these games, we simply threw it away.

“We have no complaints about Game 1, we played very poorly and didn’t deserve to be 1 up coming home. We simply got what we deserved. Game 2 was a bit like Games 3 and 4. We played well, got our noses comfortably in front and the difference was we closed it out.

“In Game 3, Bill played an amazing double to get 3 at the halfway point that really put us on the back foot. We had been at least their equal in the first half of that game but found ourselves 3 down. Then we really turned it on and curled immaculately to get 3 in front coming home. We simply couldn’t clean it up. Misses through the team left opposition stones in the house and then in attempting to win the game with a draw to the top of the house that would have left Bill nothing, we put it in the only place that leaves him any shot for a double for 3. Then the extra end we lose the left hand hack and I miss a relatively easy hit that looked as if it would plant correctly to win the game.

“Game 4 was even more difficult to take. We play our best game and comfortably outcurl the opposition for 7 ends but again have last end blow out and miss crucial clean up shots during the end. Again, I attempt to freeze a back one to effectively win the game , but it lands in the only place that gives Bill a shot for a double. If we even turn the handle, Bill has to make a six foot raise and lie to make us play the last stone. Still confident on the final draw,  we throw the same split time but it changes handle.

“So we really have to think about closing out games. In the European Seniors at Greenacres, we closed out 5 of 5 on the last stone. Here, we struggled to clean up and got what we deserved. Thanks to the team who played really well in the round, and also best of luck to the victors who will now hopefully win medals for Ireland in Sochi. They are clearly the senior specialists!”