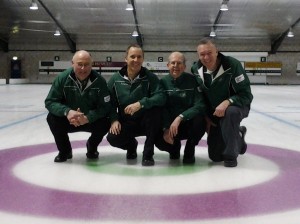 Winners first –
Bill G said: “We won the first game on the Friday evening, playing pretty well. Johnjo made a great double to win it.
Saturday morning dawned and the skipper retired to Crossgates with what has turned out to be full-blown flu. That bumped myself up to skip and David Hume came in at lead. We played a solid game on Saturday morning but were always behind the game slightly; losing a three in the 6th cost us that one.
In the third game, there were some great shots played and we were three down going into the last end but managed to get a double out to score three to go to an the extra end. In the extra, We got some guards up and got into a nice position and although Robin was lying well, we managed to squeeze in for shot. Robin had a crack at a raise but it didn’t come off and we stole to go 2-1 up.
I was slightly off the boil at the start of the Sunday morning game but the rest of the boys played really well. We were probably under the hammer a little bit in this game but we didn’t give up, having been in the same situation the day before. When it came to the last end we needed to steal a two to peel. We got some stones in the house although we weren’t lying shot and unfortunately for Robin’s team they gave us the opportunity for the double which we managed to take with my last to lie 4. Robin then came up short with the draw with his last one and that was that.
The boys played fantastically well, got stuck in and despite losing Johnjo, just got on with it. We are absolutely delighted to win the Championship. We have always said that the margins at this level are measured in inches or less and so it proved-particularly when the teams are as evenly matched as they were this weekend. Robin and the boys will be pretty disappointed but I’m sure they’ll come back fighting next year.
We will now sit down and talk about the World Seniors in Sochi.”