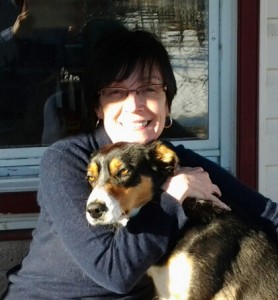 Molly the dog was cheering for Team Canada!

Turns out the Brier final was just about as exciting as the Irish men’s playdowns!

Team Canada beat Northern Ontario 6-5 after an extra end after an enthralling final in the Saddledome in Calgary. The first four ends were blanked (a Brier record) before NO skip Brad Jacobs made a great run back double for two. The sixth was blanked by Team Canada to keep last stone in the seventh. They then played a wonderful end to get a two. TC then had the ‘buff boys’ on the back foot in the eighth with four stones in the rings forcing Jacobs to draw the button. Team Canada shifted gears again in the ninth and a clearly rattled NO team were just frayed enough by this point to make tiny mistakes. With his last stone, Brad Jocobs had no option but to try a freeze to lie second shot,  but when that ended half an inch short, TC skip Pat Simmonds (playing 95%) drew to the one foot for three. But NO came roaring back again in the 10th. They managed to get two shots behind a TC stone sitting top 12 and, after Pat Simmonds’ runback attempt only got one away, Jacobs drew again for the two and extra time.

Team Canada made a great job of cleaning up the front guards but NO got a shot into the four foot and Brad Jacobs guarded it with his last stone. Pat Simmonds showed barely believable composure when he drew right to the pot lid to win the Brier. He said afterwards he was just trying not to get too “jacked up”, but to play a weight his sweepers could work with to get it home.

Team Canada win $75, 000 Canadian dollars and now represent Canada at the men’s worlds in Halifax next month. Quite a turnaround for the team that were barely speaking to each other on Monday night after loss number three in two days. At the team meeting after the game, Johnny Morris suggested he stepped down from skipping duties and asked Pat Simmonds to take over. Pat agreed and from that moment the ‘Big Red Machine’ never looked back.

Congratulations to Johnjo’s team after their big extra end win today. Hard lines to Peter’s team who took it right down to the last stone in Dumfries too.