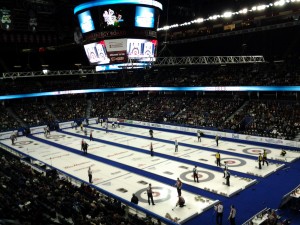 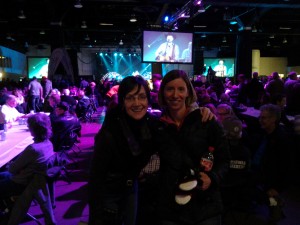 Hanging out with cousin Rhonda at the Brier Patch 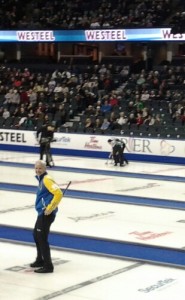 A smile from Kevin.

Would you Adam and Eve it. The things you learn when you are sipping a beer in the Brier Patch. Turns out cousin Liz’s husband Rodney’s brother Kevin was married to Hec Gervais‘  daughter!

Today Kevin Koe got back to winning ways after two defeats. His Alberta team beat Onterio tonight quite comfortably. He must be the coolest dude in curling. It doesn’t matter if he nails a triple or stuffs a four foot draw through the back his face never shows a trace of emotion. No fist pumping, no roaring at the sweepers, no brush banging and no high fives. Zen like state of calm control.

That was three games today so I am getting wabbit (taught my 5 year old cousin Olivia a new word today – ‘boak’ as in ‘Kevin Koe looked like he was going to boak’).