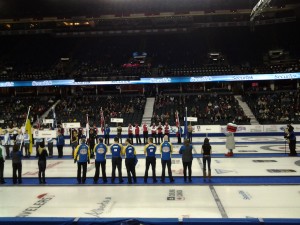 Everyone sings the Canadian National Anthem before each draw 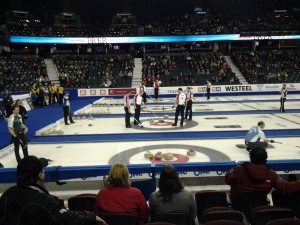 Team Canada discuss their options against New Brunswick this afternoon. 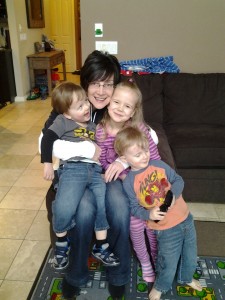 The wean magnet. Ah well, makes a change from cats.

Just back from watching Team Canada go 7-0 down after four ends against Saskatchewan. Poor Johnny Mo had a shocker. My cousin is convinced he is suffering from the curse of the Irish pin.

Team Canada finally got on the board and chipped away but they lost the game and you can see they are feeling the pressure of being the first Team Canada. Not having had to pre-qualify has put them at a disadvantage at this level. Northern Ontario on the other hand are pin sharp and a lean mean curling machine. One shot an inch out of place and they will eat you for breakfast. Koe won again tonight but his last draw was light played and his sweepers carried it miles. The home crowd also helped by roaring encouragement to the two sweepers to keep pumping those arms all the way. PEI have been a surprise but all that young team have played some excellent shots and are unfazed by any of the teams they meet.

Off the ice it was minus 16 today and we battled through a blizzard to get to Tim Hortons coffee shop for my ‘Timmys’ hit. The snow storm thankfully passed but it will be minus 30 tomorrow before ‘warming up’ later in the week.

Today I ate a jelly doughnut then a Timmys Brier doughnut. Lunch was the buffet in the posh restaurant in the Saddledome again with my usual five puddings. Then it was a beer – I like the local Calgary brewed Original 16. Then a hot dog followed by a slice of pepperoni pizza and a mango smoothie!