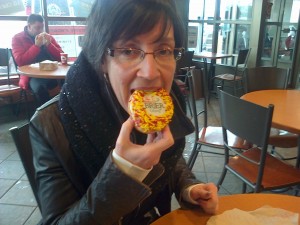 A Timmy’s a day……is the Canadian way.

a difference a day makes. Johnny Morris relinquised skipping duties today and Pat Simmonds took over. Suddenly the dynamic changed within Team Canada and they won both their games. Last night Johnny Mo looked more like Billy Nomates but tonight he was making the shots, talking the talk and walking the walk. Way more comfortable playing third stones.

Team Canada beat Alberta tonight in a game that was given huge publicity in Calgary as both Morris and Alberta skip Kevin Koe play out of the same club here in the city. The game hinged on a rare miss from Koe when he threw his inturn hit for a double a fraction wide and, to quote the commentator,  “it rode the railway tracks” hitting the first shot but missing the second. Pat Simmonds drew for two to take a two shot lead into the last end. Both teams played a wonderful last end and Koe was left with a difficult in- wick to the button to get his two but just missed shifting the Team Canada shot off the pot lid.

No-one has laid a glove on Northern Ontario so far. They have seven wins and look different class. Of all the chopping and changing of personel that the other teams have done these four Sault St Marie curlers have been together since they were teenagers.

The telly does make them look much bulkier than they are in the flesh. They are built like 400 metre runners, apart from Fry who is the bantem weight boxer type.

Great views of the Rockies from where we are staying. Such a great vibrant city. This is the third time I have been here and the eighth time I have been to Canada.  I just love the country. And minus 18 with a windchill of -24 is a novelty to me! The cold never bothered me anyway.