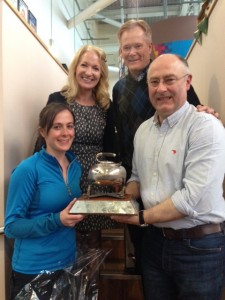 Team Gray in the upcoming Irish Mixed Playdowns got together to play in the Brechin and Allcomers Trophy event at Braehead on Sunday.

Great to see new member Jacqui Barr joining up with Dad, Ross, for the first time on the ice, alongside Margarita Sweeney-Baird and Bill Gray who had hot-footed it from the Rink Championships in Forfar.

The newly formed team won all four of their 5 end games to lift the Brechin Trophy in the 4 game schenkel competition. Skip Bill said the quickfire competition was like speed dating on ice but he was delighted for the four of them to get a run out before the playdowns at the end of March.