As we approach the part of the competition ( ie the post game celebrations) where ‘what goes on tour, stays on tour’ especially for Neil, an update blog from the Finals which are in progress.

What a day, yesterday!! The task facing us was pretty daunting to be honest but we were up for it. You might have been forgiven for thinking that we didn’t want to progress the way the skipper started the tiebreaker against the Czechs , missing a couple of easy takeouts . There was no panic in the camp tho as we felt that we were playing well and it was only a matter of time before we gained the upper hand which we did. It would have been great to have finished the game early but the Czechs stuck in and took us to the eighth. The final 7-6 score line flattered them somewhat as we were 7-4 up with the hammer and the skipper just had to remove one of their stones to complete the game. 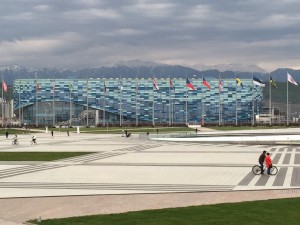 We only had a very short break of around an hour and a half before our QF qualification game against the Australians, just enough time for yet another walk round the Olympic Plaza and for Neil to take some more photographs of the Iceberg building to go along with the two hundred or so that he had already amassed!! Then it was back to the curling hall for the next instalment of the incredible journey!!

The game against Australia was a pretty tight affair. We started well forcing a one in the first and then we coughed up a steal of two in the second to continue our run of poor starts overall. We collected a two in the third which could have been a three but Bill’s attempted hit and stick just rolled out a bit. We then finished the half well by stealing a single to go in to the break all square. We felt at that point that we were outplaying them so were happy at that point. We forced a single in the 5th and scored one while trying to blank the 6th. In the 7th were were lying really well to force the single again but Bill’s last stone attempted hit picked halfway up and found what looked like too narrow a gap between two stones to leave Hugh Milliken with a simple draw for two. The momentous last end was not really going our way at all for a long while but although the Aussies were lying one with one of our stones counting 2nd shot, Bill elected to freeze in the back corner eight foot to try and make something happen and did it ever happen!!! The opposing skips attempted hit was some way wide of the mark and only succeeded in rolling across the house in to the open and left us lying two with a hit for a three. A well swept hit followed and the win was secure. An absolutely fantastic result for the Fab Four to acclaim from the watching crowd. This was a performance which ultimately proved to be our ‘Final’. The emotion and adrenaline buzz from winning that game was not far short of some of the experiences of Tårnby.

A further short break made even shorter by the now legendary speed (or lack of it) of Russian table service and the boys wee back on the ice for the quarter final against USA. Right from the off it became apparent that the previous two games had begun to take their toll, particularly for David Hume who was struggling with tiredness and we eventually persuaded him to retire after the 5th end. By that time it was clear that we were up against a very focused, capable and fresh USA outfit. We played manfully through the pain and tiredness barriers and had a glimmer of a chance in the 6th end where we were lying really well and had a hit  through a narrow port to lie 3 and guarded.This time it was the skip’s turn to succumb to the rigours of the day, struggling to get the up weight hit away and caught the guard allowing the USA to draw for two. That was probably the final nail In the coffin as the USA went 6-2 up. We tried to construct a multiple score in the 7th but the USA skip played a great last stone draw to force Bill to draw the shot for a single 6-3. We played a great last end and had the opportunity to lie three and make the US skip play his last but Bill’s attempted side tap on a winger was just fractionally heavy and the game was done..so were the boys!! We were totally shattered after that marathon and quite frankly it’s too much to expect Seniors to curl three games in a day at this level. I cannot understate the drive and determination that we showed all through the week and especially yesterday when our bodies were screaming at us to stop – well mine was anyway!! We never gave up even when things weren’t going our way and the teams we played against will be well aware of the fighting spirit of the Irish even when we were down to three men standing; as will anyone who saw us in action. We have had a fantastic week tinged with regret that the Big Man wasn’t with us physically-but he was definitely here in spirit. We have done ourselves proud and for me personally to stand in at the late stage for JJ was a huge step but I couldn’t have managed without the help and support of the Terrible Threequarters of the Fab Four. Thanks guys it was a privilege. 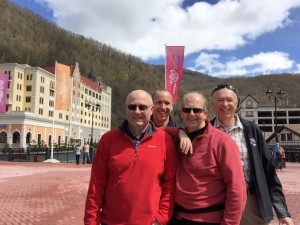