This article, featuring our Neil, appeared in today’s edition of The Galloway Gazette: 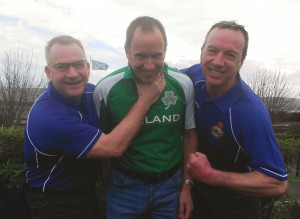 Earlier this week three Stranraer curlers headed off to the World Senior Curling Championships in Sochi, Russia, to play for two different nations.
Hugh Aitken and Norman Brown will pull on the blue jersey of Scotland while Neil Fyfe will be in the green of Ireland. And to add a bit of spice to the occasion the two nations are due to play each other next Thursday morning.
Hugh and Norman have appeared for Scotland many times over the years, both were junior world champions and European champions in the 1980s and 1990s. They are both making their second appearance on the world seniors stage having competed without success in Ferdericton, Canada in 2013.
Norman said: “We were disappointed with our placing two years ago and we are really going out there to carry on with unfinished business.”
Hugh added: “And as a jeweller, my favourite colour is gold so that’s the only colour of medal I’m coming back with!”
Neil, who has represented Ireland at international level since 2006, also played in Fredericton and at the World Seniors in Dumfries last year. The police sergeant was equally bullish about his team’s chances as three of his teammates won gold in 2012.
“We got knocked out in the quarter-finals last year and we were unlucky not to win that game as we all played well. We will see how it goes in Sochi.”
With a world title at stake, all three curlers said there would be no quarter given when the two teams meet next week. Friends before and after, but not on the ice!
Also in the same section as Scotland and Ireland are Kazakhstan, Latvia, Japan, Czech Republic, Canada and Italy.