It was David W that twigged the significance of the day yesterday when he announced that he had a spooky feeling – no, not encountering the kittymeister sleepwalking during the night but the fact that we would be playing Canada again 3 yrs to the exact time in 2012 when we took them on in Taarnby. We didn’t start our prematch routine too well as we put a bit of a dent in our draw shot challenge average which up to that point had been the best in the competition. The game started pretty steadily with Canada scoring a regulation 2 in the first and restricting us to a single when Bill had to nose hit the Canadian counter. The third end was a series of draws to the back corners and when the Canadian skip came to play there were a few Irish stones in play but only counting one. He tried a delicate tap back but only succeeded in locking our counter onto one of his own and spin off to leave us stealing 2.  The drama proper began to unfold in the 4th end. Firstly, the Canadian third stepped back and caught the skipper in the Crown Jewels with his brush!! 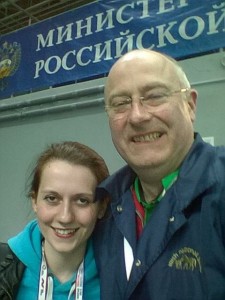 This was followed by an attempted double to lie 2 by Neil which nearly came off but in the process of trying to sweep the hit stone out, Bill injured himself and had to be assisted from the ice where he was stuck on all fours! A quick assessment of the damage centred around his back and hamstring (he didn’t know he had one up to that point) but that sliding was ok. The eventful end finished with the boys forcing a 1 to tie the scores at 3-3 and the skip retired to the doctors room for further treatment, with the help of Dasha, his now personal interpreter!!

The second half of the game was a pretty much cat and mouse affair with some pretty good curling by both teams with neither one being allowed to impose themselves on the other. The 5th had a fair few stones in play and lying one, Bill tried to draw another up to tap out the Canadian second stone. He nearly got it wrong, narrowly avoiding pushing the Canadians in for shot. The 6th saw Canada score one again and the game then possibly turned in their favour in the 7th when Bills first corner freeze over curled leaving a Canadian stone lying shot and when they drew a second to the house, Bills attempted nose hit didn’t stick and we gave up a 1. We were fast approaching déjà vue territory – all over again! One down with the hammer trying hard to get a 2……. Almost came off but the Canadian skip played a pressure hit and roll to take out Bills first stone leaving him a nose hit to force the extra end which he duly completed. Now we really were in spooky territory!! Extra end against Canada without the hammer – and without Johnjo!! There was further drama to come as the game was halted after two stones as blood was discovered on the ice. Turned out that the opposition lead had developed a nosebleed – and we didn’t touch him, Your Honour; honestly!! The offending matter had to be removed, a little pebbling followed by running a couple of stones over the area…….all really conducive to calming the nerves!! NOT! In the end, we had a chance to get a hit and roll behind a guard to force their skip to draw ( which would have been spookier still) but couldn’t get the roll which left them a nose hit for the game 6-5. Sorry this has been a bit long but it was quite a game. After a beer or two with the Canucks, we then tried to gate crash a private Oligarch party in the restaurant we went to! Having been blown out of that one, the next one we tried was shut for ‘technical reasons’ – probably away spending their ill gotten gains from the bill mix up of two nights previously!! Third time lucky saw us in a Russian restaurant on campus which was very good thankfully. An eventful day but enjoyable nonetheless – more so that the Czechs had beaten Japan which will do our cause no harm at all. More tomorrow as the round robin finishes with games against Italy tonight and Scotland tomorrow. In the meantime, it’s caption competition time from our trip up the mountains today. Answers on a postcard!! 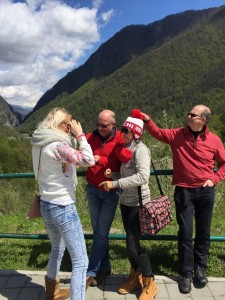 Captions on a postcard please…..