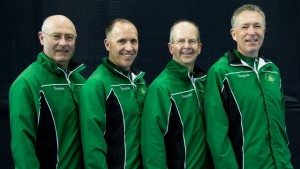 Day 2 dawned with the knowledge that today’s games would be pivotal in our campaign and we needed to be at out best to come through the day with two wins. A 1200 start time and first practice for the game against Latvia was the order of the day with Bill and Neil rostered in for the two stone DSC. First use of the ice is always tricky and when the skippers draw shot pulled up ( just) at the back of the house, it needed Neil to salvage the situation with his draw – and he duly obliged. The Latvians however had the hammer after their DSC.
The game proved to be a nervy affair with both teams feeling a bit of pressure. We played the first half of the game well limiting the Latvians to a single in the second and picking up a three in the 4th with Bill playing a great angled raise at hack weight round a guard which proved to be the game changer. The second half was nervy with some mistakes – mostly due to the ice keening up dramatically- from both sides although David H and Neil adjusted more quickly than Bill and David W and held the show on the road. We came to the last 1 up with the hammer. The front end and Neil did a great job clearing the guards and when Bill played a good clearing shot on two stones in the house, a failed freeze by the Latvian skip who was heavy left us with a win without having to play last stone. Phew!! All in all, a tough game for various reasons but we were delighted to come out with a win, even if it wasn’t pretty. Japan next up this evening – another big one; but then again, at this level, they all are!!