“A world championship is never a bad thing to participate in. And this inaugural World Mixed Championship was no exception. Great ice. Great venue. Great Curling. Switzerland has always been expensive for us however the currency revaluation at the start of this year seems to have moved it up another notch. £17 for a lunchtime “spag bol” and £100 a night for a ‘cell’ with open plan shower. However, I better watch what I say. An interesting addition to the pre-competition team meeting was a threat of an open ended ban for negative comments on social media. I hope the WCF social media monitors realise that powerful as they are I am not blaming them for the strength of the Swiss franc!

“As to the competition it really was top class. Over the last ten years the quality of curling has increased considerably. The emerging nations show a desire and ability that all too often belies their facilities. It is true that sometimes they do still lack a bit of experience and will choose the wrong shot but nowadays they get it right far more often than they get it wrong!

“Every team will look back on events and think ‘what if?’ Of course we are no different. We had early chances against a very efficient Danish foursome which included Olympic silver medallist Trine Qvist but ultimately they were just too good on the day. Our game against Sweden was a real classic and literally came down to a few millimetres. However Italy’s excellent young team quite simply blasted us off the ice, starting with a first end raised triple take out. On the other hand our victory against experienced French skip Thierry Mercier was won by millimetres in a great game which could have gone either way. It’s funny how you only remember the losses when you think of what might have been!

“I went in to the competition with a bit of an ankle niggle which deteriorated and put an (even greater) strain on my team mates. However, and as usual, Tony (Tierney) and Marie (O’Kane) performed outstandingly well throughout. Less expected was the contribution of newbie Jen Ward. As a curler of less than a year she had an outstanding tournament and without exaggeration I would have ranked her in the top 10 leads in the event. Of course she can now no longer use the newbie tag. I hope the experience encourages her to continue to develop her curling experience.

“A massive vote of thanks as always must go to the Local Organising Committee and the many volunteers including umpires that it takes to hold such a massive championship. 36 teams, coaches and supporters take a lot of organising. The transport was top notch, the facilities great and nothing seemed to be too much trouble for the organisers. The closing banquet was one of the best I have attended although I did opt out before the music and dancing part of the night. Late nights and hangovers followed by a long days travel are now beyond this old and battered body. I hope I have managed to give an insight which will encourage others to think about entering our championships and getting to these events. They really are something very special and we are very privileged to be part of an association like ours which encourages participation in our qualifying events. 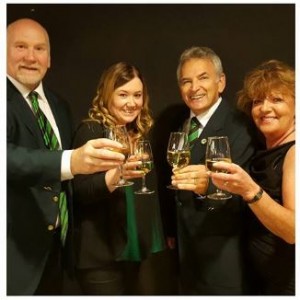 Johnjo, Jen, Tony and Marie putting on the style

“And finally I must than my team mates for putting up with me (it is getting harder), our coach Charlotte, our band of followers, Gerry, Gillian, Andrew (aka Finnie), James and Shauna and also all the many, many well-wishers for their support before and during the event.

“Hopefully see you on the ice soon.”