Ireland’s mens team kicked off their European C league challenge with a comfortable win against an inexperienced Andorran team this afternoon in Champéry.

Despite losing the last stone draw, the Irish men’s team managed to take the first five ends to lead nine to nil, before the Andorran team took a one. The Irish team then took a comfortable two with the hammer for the first time to close out the match 11 – 1.

For Andorra, the bright light on the horizon is that their skip made a number of real pressure draws and we wish them well going forward.

Having been given a general time warning at the initial team meeting, the Irish team ran through the game at a fair clip which should help with tomorrow’s schedule which includes three matches against Romania, Bulgaria and the French.

Today also marked the international debut of Eoin McCrossan who put in a solid performance as the Irish team lead.

The Irish ladies started very well against Slovakia and lost only 3 of the 8 ends but a couple of big ends lost took the score away from them. 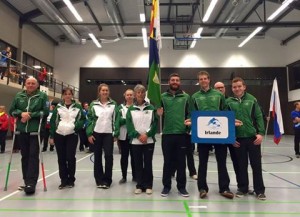 Tonight is the tournament’s opening ceremony and so far the impression is of an extremely very well organised competition.

Tomorrow is a busy day for the mens team with 3 games at 8am vs Romania, 4pm vs Bulgaria and 8pm vs France. The women play Slovenia at noon.