Alison Fyfe skipped the Ladies team to their first victory of the European Curling Championships C division at Champéry. They dominated the first half  and after taking a 4 in the sixth end and Croatia just getting a one in the seventh, they shook hands.

This afternoon the Irish men suffered their second defeat in succession at these European championships. Having lost the hammer they put the opposition under pressure and stole one after the opposition rolled out on a hit. Following this, the Serbians drew against two at the back of the house to score a one in the second end.

The third end is certainly one to forget for the team as several draws sent through, meant that the Serbians were lying 3 come the final shot of the end. Unfortunately another draw was sent through the back and Serbia stole 3. The fourth end started brightly but a jam on a hit for a potential 4 gave the Serbians another point to leave the Irish trailing 5-1 at half time

Following the break the Irish had a renewed sense of focus and the 5th end was blanked. In the 6th end the Irish converted a draw for 3 and were right back in the game. The Irish were firmly in control in the 7th and the Serbian fourth made a good, under pressure hit and roll to score a single and lead by 2 coming down the final end.

An exciting last end saw the Irish lie 4 before the Serbians final shot. Another excellent clutch draw by the Serbian fourth saw him freeze onto stones back tee and lie 1. The only option for the Irish was to attempt a tricky runback which unfortunately did not come off.

The Irish will rue what might have been after a slack first half. Nevertheless they have a 3-2 record at the halfway stage and look forward to three games against Belarus (8am), Luxembourg (4pm) and Slovenia (8pm) tomorrow. 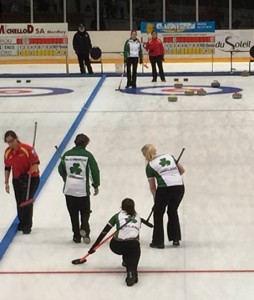 The ladies played a good game against Spain and dispatched them in just 6 ends allowing them only one end.