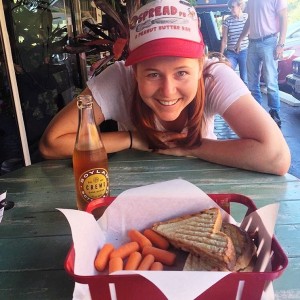 Three things that really annoy you – People who don’t like the Kings. People who have peanut allergies. Pickles.

What was the last film you saw? –  “The Walk” starring Joseph Gordon Levitt. It was basically a two hour close up of his feet, so I guess it will be a hit with all the people out there who have a foot fetish…

Give us a playlist of five of your favourite songs (and artists) – I would just listen to The Titanic Song by Celine Dion five times in a row. RIP Jack.

And one song you never want to hear again? – Anyone trying to cover that Titanic song that isn’t Celine Dion. Just stop trying.

What would be your specialist subject on Mastermind? – Well, we don’t have that show in the US so I don’t know what it is, but I guess “Peanut Butter Master”?

Washed down by? – Butterbeer.

Tell us something about yourself that will surprise people? – I decided to try and learn how to drive stick shift for the first time this summer on a crowded street in Manhattan…during rush hour traffic. It was a really smart decision. Also, never again.

You can save one prized possession. What is it? – My inflatable Stanley Cup.

What keeps you awake at night? – Knowing I don’t have any food in my fridge to eat for breakfast tomorrow morning.

What’s the best piece of advice you’ve ever been given? – Never trust a person who pours the milk in before the cereal.