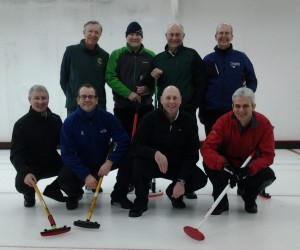 Robin, playing with Jim Cannon, Doug Kerr and Eric Richardson,  got the win 7-6, but the game went right down to the wire.

JJ, Bill, David W and David H were 5-2 down at one point but engineered a big four to pull 6-5 ahead. The game then went to peels at six all going down the last end.

Robin raised a stone from the front of the house onto the four foot behind cover and Johnjo couldn’t shift it.

Both teams have a tough road ahead to qualify for the worlds but this was a high class fine tuner for them.