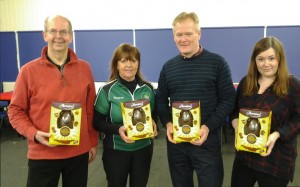 At the AGM after the game, Johnjo Kenny and PJ Wilson came off the committee, Carolyn Hibberd and Craig Whyte remain on the committee and coming onto the committee were Jen Ward, Eoin McCrossan, Arran Cameron and Robin Gray. John Gilmore and John Wilson were accepted as new members.