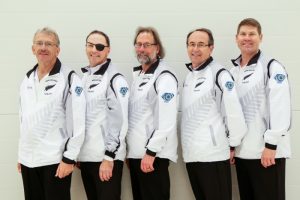 1st End – Starting out with both team very defensive, one mistake from NZL and Ireland takes 2.  2-0
2nd End  – A missed stone put us under pressure, NZL lie 2. Pete going for the raise double and only takes 1. NZL draw for 2.    2-2
3rd End – Again both teams very defensive, ready to capitalise on the mistakes.  Hans Frauenlob, the New Zealand skip, draws the button with 1st stone, Pete goes for raise to lie 1.  Frauenlob taps back to lie 2.  Pete goes for draw but it stays straight, giving up one.    2-3
4th End –  Lots of power sweeping in this end from both teams. It’s important to keep the ice clean. Pete going for a tap back against 2. Draws shot, NZL skip puts up
guard, Pete going for a draw and takes 1.  3-3
5th End – Great end for Ireland. Pete had a great cross double forcing the Frauenlob to draw shot. 3-4.
6th End – Pressure on Pete after missed shots but he  plays a tremendous draw to lie shot, but NZL follow him to lie shot. Pete has to play for tap back, but  sweeping errors let a perfect stone to sail past. NZL steal 1. 3-5
7th End – We have to get the sleeves up. Pete has to try pull out the big shot with his first stone with a draw – and it’s a great shot. Frauenlob puts up a guard, forcing Pete to play another excellent draw for 2.  5-5
Game on.
8th End – Turning into a very interesting end, NZL lying 2 with skip stones to come.
Stone position not in our favour. Pete elected to go for hit and roll and just rolled too far. NZL still lying 1 with skips’ stones to come. Frauenlob peels his own guard. NZL still lying 1. 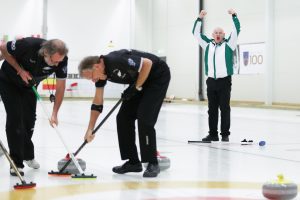 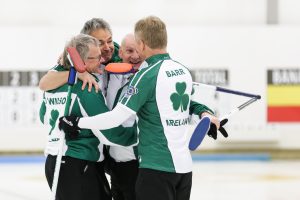 Pete plays a superb tap back with his last stone on an Irish stone to lie shot. Under pressure, Frauenlob fails to draw the shot and  Ireland are in semis!”