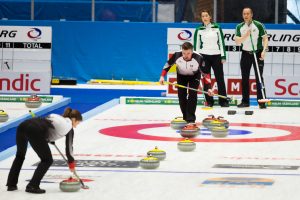 He said: “Canada hit the one foot with both draw shots in the DSC so got the hammer. Alison drew to the front of the four with her first stone in the first end and then I managed to draw one behind it to freeze against the pre-positioned stone with his first. This proved too good for the Canadians to move for the rest of the end so Ireland stole a one. 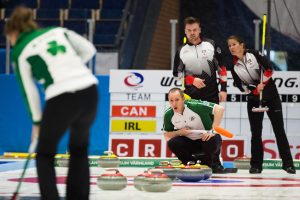 “Canada stepped up a gear or two after this and took two two’s before Ireland managed to take a one in the fourth. Canada led 4-2 at the half time break.

“Canada piled on more pressure by taking a three in the fifth so Alison and I decided to use our power play in the sixth end. A very rare miss by the Canadian female player Marliese Kasner gave us a chance for a three if they split a short stone at the front – but unfortunatey Alison was a tad wide and heavy and her shot slipped through the house. After managing to restrict the Canadians to a one in the seventh  the score was Canada 8 Ireland 3. The Canadians who were by far the better team ran the Irish out of stones as soon as they were allowed to hit in the eigth.

“Neither Alison or I had expected to win this game – but we were a bit disappointed the score was not closer.”