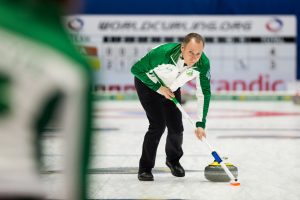 He said: ” First game for Team Ireland was against Italy on the evening of the second day of the competition. Its fair to say that we were both pretty nervous as it was our first appearance at this level in Mixed Doubles. We had managed to get 10 minutes of practice ice on the sheet we were playing on the evening before – which in itself was no mean feat as all 42 countries that have entered the competition are looking to practice on the five sheets of ice after the last game – so we were happy with the  stones and liked the weight and feel of the ice. Having said that Italy who are currently ranked 17 in the world – some 14 places above Ireland had the advantage of having already played earlier in the day. 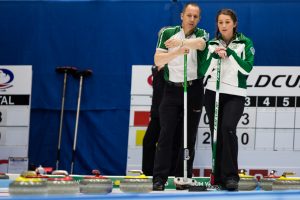 Neil and Alison got off to a good start however by both hitting the one foot during the last stone draw, bettering the Italian efforts so earning the hammer in the first end.
After a couple of nervous shots Neil and Alison finished the first end well taking a two. The second end saw Alison and then Neil both play lovely draws behind the guard to set up the end well resulting in a steal of one.

After reprimanding Neil for his poor tactical decision during the half time break coach PJ Wilson left the bench to head off to the Karlstad Curling Club to play in the seniors game against Canada.

In the fifth end a great freeze by Marco Pascale (whose mother is Scottish) who was playing the middle stones, caused the Irish team problems for the rest of the end – another steal of one for the Italians.

With the last stone in the sixth end and being two down Ireland decided to use their power play – which they did to great effect with some excellent shots taking a three. In the seventh end the Italians decided to use their power play however after Neil drew round Alison’s guard then played an angled double the Italians lost the advantage of their power play and after Alison’s last stone draw behind a guard to the side of the four foot the Italians were left facing three Irish stones Lucrezia Laurent who was playing first and last stones played a beautiful draw to the one foot to take a one and levelling the game going into the last end. The Irish team played some lovely shots in the last end and after Neil’s last stone the Irish had three stones welded together in the one foot the back one being frozen to an Italian stone. With another Irish counter at the front of the four foot. The Italians failed to move any of these three shots and Alison did not need to play her last shot. “

Final score Ireland 9 Italy 6.  Neil and Alison were totally delighted and somewhat relieved to have won their first game!