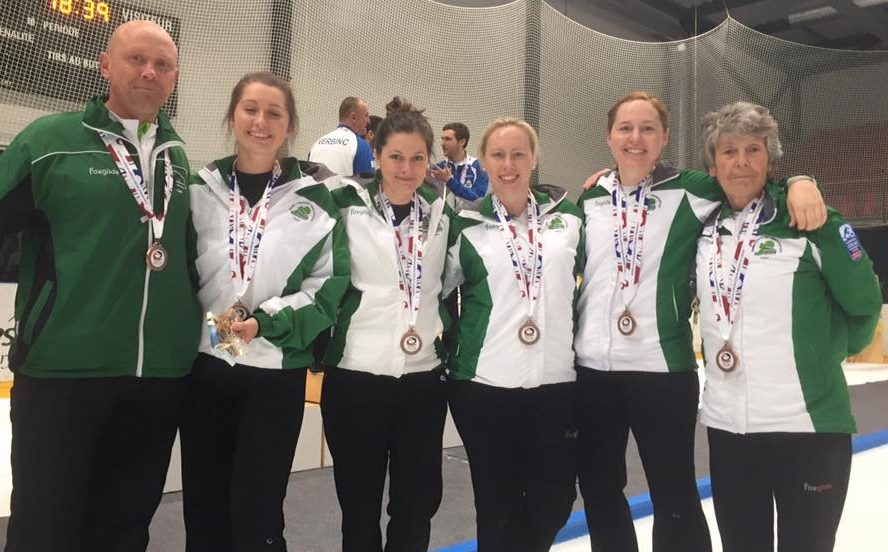 The current Irish ladies curling squad (Team Anderson) have announced that Kerry Group has come on board as main sponsor to the team for the forthcoming WCF C-Division European Championship and the 2016/2017 season.

With its headquarters based in Tralee, Co. Kerry, Kerry Group is a world leader in the global food industry. Kerry provides market leading innovation through its Taste & Nutrition technologies and systems for the food, beverage and pharmaceutical markets.

Kerry has enjoyed phenomenal success since commencing operations in 1972, and now markets some of the best known and best performing brands in the chilled food sector including, Dairygold, Richmond, Charleville and Yollies through its Kerry Foods branch. Kerry Agribusiness forms the third strand of the Group, which works closely with the Group’s 3,500 milk suppliers in the South West of Ireland, ensuring the efficient production of high quality milk as a source of premium quality, sustainably produced dairy and nutritional products.

“Kerry Group has a proud record of supporting a range of community development, arts, education and sporting initiatives. We are pleased to support the Team Ireland Ladies Curling and wish the team every success in the upcoming tournament.”

As the ladies prepare for the C-Division European Championship, taking place in Ljubljana, Slovenia from 25 April to 1 May 2016, skip Ailsa said:

“We are absolutely delighted to be joined by Kerry Group. Their generous sponsorship means that the ladies can invest in the future of the team.

“Kerry Group’s sponsorship also secures the attendance of Coach, Martin Sutherland at the Championships, something which the Team might otherwise have been unable to afford without securing sponsorship.

“Martin is an invaluable member of our Team and we are thrilled that he will be able to accompany us later this month in the pursuit of building on our bronze medal in 2015.”

In addition to the Kerry Group sponsorship, the ladies area also pleased to announce that they have agreed a deal which sees them join the Hardline Family (#Hardlinenation). Watch out for the Irish Ladies using Hardline Power Grip brooms at the C-Division Championship and at competition throughout the 2016/2017 season.

1 thought on “Ladies team to be sponsored by Kerry Group”