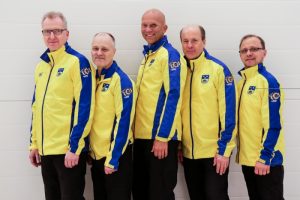 The Irish Senior Men’s team, skipped by Peter Wilson, lost to Sweden this morning in their 6th round robin game. This takes them to the 4 wins and 2 losses in the World Senior Curling Championships in Karlstad, Sweden.

1st end – after an exchange of shot stone, Pete hit and rolled behind a guard with his second shot but Swedish skip Wrana came round the guard to tap the shot stone back for a 2.  2nd end –  This turned into hitting end that was blanked by Ireland  0-2.
3rd end –  Once again, not too many stones in play during the entire end which concluded with Sweden forcing Ireland to take a single.  1-2
4th end – The front end, Tony and Ross, played well to build up  the head as the Irish did not have last stone. PJ was unlucky when he just rolled out  and  Pete was facing 3 with his first stone, playing a cool hit to lie shot. Wrana hit and stuck to lie 3. Pete facing 3 again with his last stone. This time his hit through a port didn’t lie shot leaving Wrana the draw for a game changing 3.
5th end –  Pete had to draw against 2 to take a 1.
6th end – Pete had to draw the shot against 3, but with last stone the Swedes nailed the take out  for another 3.  The Irish offered handshakes with the score 8-2 in Sweden’s favour.

“The score doesn’t reflect on how the guys are playing, they are just not getting the rubs that’s required at this level.”

Their next game is tomorrow, Wednesday 20th April, at 12 noon against France.